Posted on December 2, 2011 by manchesterclimatemonthly

Six volunteers working for Action for Sustainable Living  have pulled off an excellent and (1) deeply flawed “South Manchester Environmental Forum” tonight. The event, which saw a total of seven presentations given to a packed room of more than 60 people, was the fourth in a series of forums (2) with the explicit aim of information sharing and networking. 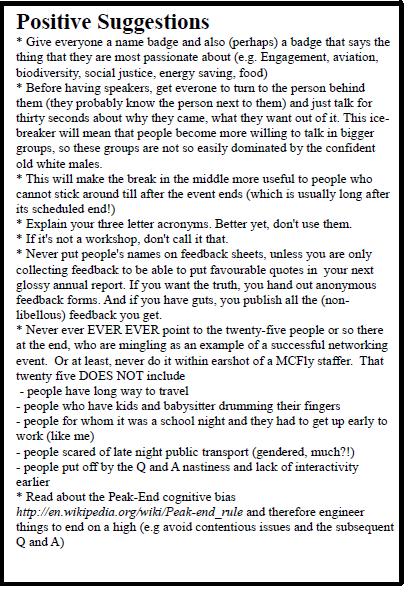 After brief welcomes, five speakers gave “pecha kucha” powerpoint presenations. In peta kucha each slide is up for twenty seconds, and a presentation lasts for 20 slides. This is an excellent way of stopping people over-running their allotted time!

The presentation on the Mosscider project got everyone thirsty for cider, and hopefully some will be available at the next-SMEF-but-one.

Carbon Coop talked about the barriers to energy-saving (not having a “one-stop shop”, mis-selling, not having accurate information about current state of house, not having the lump sum to invest in long-term savings) and how Carbon Coop is trying to arrange bulk purchasing and sharing of experiences. (3)

Dave Butler gave an account of the plant life affected by the new Metrolink, but no comparison with the changes to biodiversity that will happen with the kinds of temperature increases we are looking at with unmitigated climate change.
The final presentation was about the new www.ManchesterLETS.org. LETS are “local exchange trading schemes”, and the idea of a city-wide one that is not a federation of existing and thriving local schemes gave MCFly’s reporter deja vu for the grandiose aforementioned “Transition City Manchester.”  Still, it deserves support, and MCFly will happily run free listings if asked.

Sadly, not a single one of the speakers tried to engage the audience, asking people what they already knew, or thought. A simple ‘straw poll’ about “who had roof insulation”, or “who had used LETS before” could have given useful information to the speakers and gotten people out of their growing torpor.

The volunteer in charge, Joe, then wrapped the first half up, but there was then some unfortunate undermining of his authority around when the break would finish. After the break, during which most people seemed – predictably enough, to mingle with those they already knew, there were two presentations which had been billed as “workshops.” Workshop is a word that can join “sustainable” in the “meaningless” box (with “resilient” to follow in a couple of years). These were not workshops, they were presentations without the merciful format of pecha kucha.

Nigel Rose, who sits on the Stakeholder Steering Group (and MCFly notes with precisely zero surprise that the promised answers to questions have not arrived), gave a presentation on the Manchester Climate Change Action Plan. He pointed out that the second goal of said plan – “culture change” and “carbon literacy” – will not be reached by top-down presentations. That effect was somewhat spoilt by the fact that he gave… a top-down presentation, replete with slides full of text and whizzed-past graphs. The twenty-five minute slot (cut short by technological failure – cheap allegory, anyone?) COULD have been – if negotiated with the organisers – 10 mins of talk and a handout that linked to publicity material, followed by time for small group discussion and q and a.  This would rely on the existence of publicity materials, naturally.

But there seems – after 18 months – to be no publicity material about the Steering Group, or the Action Plan.

There seems – after 18 months – to be no youtubes about the “Manchester A Certain Future” document or the “Steering Group” or its activities.

No information about the first Annual (cough cough) Stakeholder Conference (and it was interesting to note that the word annual seemed to have disappeared from the powerpoint presentation).

The official website has a total of 6 blog posts in a year, no feedback on the last year’s conference, no minutes of meetings (because, in contravention of its own Terms of Reference, there are none)

In summary, there is no evidence of any activity undertaken in the last year.(4)

And tonight there was no paper form distributed to gather attendees’ projects so they could be put on a big public database, no form to get the questions there wasn’t time to answer, or to get the ideas about what could and should be done in Manchester.

The final presentation was so late starting that the person next to me, who had come specifically for it, had had to leave. It was advocating a “Hulme Community Partnership Project” around the expansion of MMU onto Birley Fields.  The Q and A on this contentious issue, inevitably descending into extended acrimonious point-scoring, and several people voted with their feet.

The evening wrapped up and some people stayed around chatting.  Others, of course, had left before they got the chance to mingle.

The next South Manchester Environment Forum happens at the Big Green Festival on March 31st. The SMEF organising group is looking for more volunteers, and have a meeting in January. Venue and time will be publicised, including via Manchester Climate Monthly.

(1) Yes, “and,” not “but.” An event is capable of being both; Western binary thinking is always and absolutely bad. And before you tell us we are being negative, read this.
(2) Yes, yes, we know, “fora.”
(3) See here for a MCFly guest post on “The People’s Republic of Energy” by Jonathan Atkinson, the speaker tonight.
(4) Yep, before you ask, MCFly will do all these things – and more – in the coming months. We’re funny like that.