Posted on October 31, 2012 by manchesterclimatemonthly

Jonathan Atkinson, writing in a personal capacity, reports and comments on an important launch at the Arndale Centre… 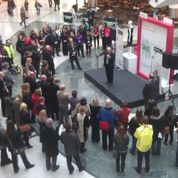 Tuesday saw the launch of Manchester Carbon Literacy, a highly ambitious and powerful programme that seeks to make available a day’s worth of training in climate change awareness to everyone who lives, works or studies in Manchester.

The launch took place at the Manchester Arndale shopping centre and featured speeches from Manchester City Council Leader Richard Leese and MMU Vice Chancellor Professor John Brooks as well as Dave Coleman and Phil Korbel from Cooler, the social enterprise that have been pioneering the programme over the last few years. 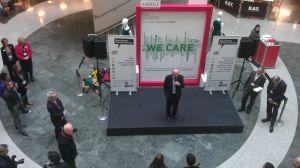 Carbon Literacy Pilots have been running throughout the city for the past twelve months and the first fifty Carbon Literate graduates, including staff from the Arndale, Manchester City Council and pupils from Stanley Grove Primary School, were awarded their green mortar boards at the event.

The presentations were followed by complimentary refreshments and general networking and mingling and it was encouraging to see a good turn out from a wider range of sectors including business, educational institutions , community and campaign groups as well as those graduates.

Manchester Carbon Literacy are now seeking to roll the project out city-wide and are planning a large-scale engagement event early in the new year and looking for freelance trainers.  [And more volunteers]

Find out more at: www.manchestercarbonliteracy.com

I thought staging the launch in the Arndale, a modern-day temple of Mammon and surely an example of all that is unsustainable, was a brave move but ultimately a canny one strategically.

Firstly, for Manchester Carbon Literacy to succeed, by its very definition it needs to reach beyond the converted. Holding the launch in the middle of the day during the week at the Arndale succeeded in attracting a healthily, large and diverse audience, something traditional green groups struggle to do at venues such as the Student Union, Friends Meeting House or the back room of a pub.

Secondly there is the subversive element, if Manchester Carbon Literacy succeeds in its aim (and let’s hope to hell it does!), we’ll be blessed with a population of empowered, knowledgable and active citizens. In this carbon literate future we’ll be able to make our own, informed, choices as to the wisdom of cheap flights abroad, houses without any insulation and ultimately, a consumerist society.

In the end this is a project all environmentally-motivated people should support in the hope that this initiative might bring about a genuine culture shift on climate change from the bottom up.

Was print format from 2012 to 13. Now web only. All things climate and resilience in (Greater) Manchester.
View all posts by manchesterclimatemonthly →
This entry was posted in Event reports and tagged cooler projects, Dave Coleman, Manchester Carbon Literacy Project, Phil Korbel, Richard Leese. Bookmark the permalink.