Climate scientist Kevin Anderson talks to Manchester’s full council about turning climate rhetoric into reality, steady state and why it’s too late in the day to be pinning our hopes on technologies

Weds Jan 30: Kevin Anderson, professor of energy and climate change at Manchester University, was invited to give a 30 minute presentation to Manchester’s full council meeting today. The great hall was packed out with 90+ councillors and over 35 members of the public. Here’s what happened next… 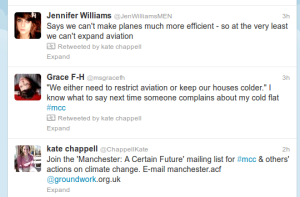 As usual, Professor Kevin Anderson delivered a no-nonsense presentation about what the science is telling us about climate change – that it’s coming faster and harder than even scientists thought – and what we are doing to stop it (very little basically). In fact, we are producing more carbon every year. Anderson kicked off by saying that whilst a 2 degree rise in global temperature was seen as acceptable twenty years ago, the latest research shows that it’s actually more dangerous than previously thought. And yet we continue to pump carbon into the atmosphere. Leaders fly into agree carbon cuts at climate summits and yet our emissions climb steadily upward. Globally, emissions are rising by 3% every year and every decision that we make now will ultimately decide our fate.

“We can’t do enough to stop these rising emissions with just supply technologies,” explains Anderson who is Deputy Director of the Tyndall Centre for Climate Change Research. “The only way you can change this is by changing demand [for resources] and behaviours now. We can’t wait for technologies in 2030, we have to focus on what we can do right now.” If targets set by the council in their climate plans ‘Manchester – A Certain Future are delivered, then that would put Manchester on the right path he added.

However, Anderson states that the council needs to be more ambitious. They need to cut CO2 by 60-70% by 2020 and 90% by 2030 rather than 41% by 2020. Manchester City Council also needs to adapt the city and the homes of its poorest inhabitants for a changing climate whether that means more flood, more heat-waves or colder winters.

“We need to ask ourselves if we can live in a world 4 degrees warmer where trains can’t run, there are water and food fights and there is a breakdown in sewage and energy infrastructures,” says Anderson.”If not, then we must do all we can and at all costs to avoid. “The world after 4C is beyond adaptation, it’s unstable and the warmer it gets the more likely it is to trigger other things which make it more unstable,” says Anderson. “We need to avoid this at all costs- if death is the alternative than it’s not too expensive and we must do all we can at all costs.” So, how do we make such changes? Well, Anderson points out that 80% of the emissions are from 20% of the population and so the town hall which is full of influential and well-off people need to change their own habit and lifestyles.

That brings us neatly to the Q&A which included questions from councillors on topics such as nuclear, aviation, employment, the voice of the poor and also steady state economy.

Leader of the council Richard Leese highlighted the Low Carbon Hub which will be investing 7 million in domestic retrofit in the next 2-3 years and acknowledged that encouraging a reduction in demand of energy is important. He also raised a question on nuclear to which Anderson replied that the UK shouldn’t be considering nuclear when it has so many renewable options although globally nuclear will need to play a role. Anderson also added that retrofitting is a great way to provide job and also make homes more resilient – a win-win situation and a counter to those who say that we need to tackle unemployment first and foremost. Labour councillor Neil Swannick welcomed the talk as an important ‘wake up call’ at a time when climate change appears to have slipped off the agenda.

Lib Dem councillor Norman Lewis also asked what MCC’s recent acquisition of Stansted airport means for it’s carbon commitments given that the aviation industry is such a large polluter. Only half jokingly, Anderson said that if the council was buying them to close them then that would be okay. “We can’t see emissions from aviation grow and so the airport can’t expand,” he said. “You can make planes technically more efficient but you do need to constraint the amount of aviation we have or live in colder homes. As flying is mostly what rich people do, then we can’t really ask poorer people to make that sacrifice.”

Labour councillor Kate Chappell asked whether the figures in the recent report by Steady State Manchester with regards to aviation producing more emissions than home energy consumption were accurate and highlighted the need to deal with aviation. Anderson said they seemed broadly accurate as locals living near an airport tend to fly more often that those living with further away and so have high aviation footprints.

Speaking to MCFly after the event, Richard Leese said: “I’ve heard Kevin Anderson give that speech before which is why I asked him along to full council. I think there is a certain shock factor which will help stimulate people into action and encourage members to be active in the implementation of the council’s climate plan. My aim is to get councillors to be active proponents in tackling climate change and not just passing strategies.

“The real task now is to address those things we can address such as behaviour change which is in our Manchester – A Certain Future plans and is the aim of projects such as Cooler which is all about carbon literacy. We need to use Kevin’s address as a catalyst to push that kind of work forward.”

It’s certainly been an enlightening if depressing event, as Nigel Murphy, executive member for the environment put it, but it’s been an important wake up call. It may seem depressing for many councillors right now but at least they have a better sense of the reality we face. As Kevin Anderson states, real hope can only come from an honest assessment of the scale of the challenge we now face. I think today’s talk may have brought us a little step closer.

Freelance journalist based in the UK with an interest in the Middle East, environmental issues, Islam-related topics and social issues such as regeneration.
View all posts by arwafreelance →
This entry was posted in Manchester City Council and tagged Kevin Anderson, Richard Leese, Tyndall Centre. Bookmark the permalink.