Posted on August 20, 2013 by manchesterclimatemonthly

Manchester City Council’s buildings emissions went up last year. They don’t seem particularly bothered by this, of course. Number 7 of the so-called “actions” in the so-called carbon reduction plan, and we’re already into things that any reasonable human being would think of as very basic stuff.* 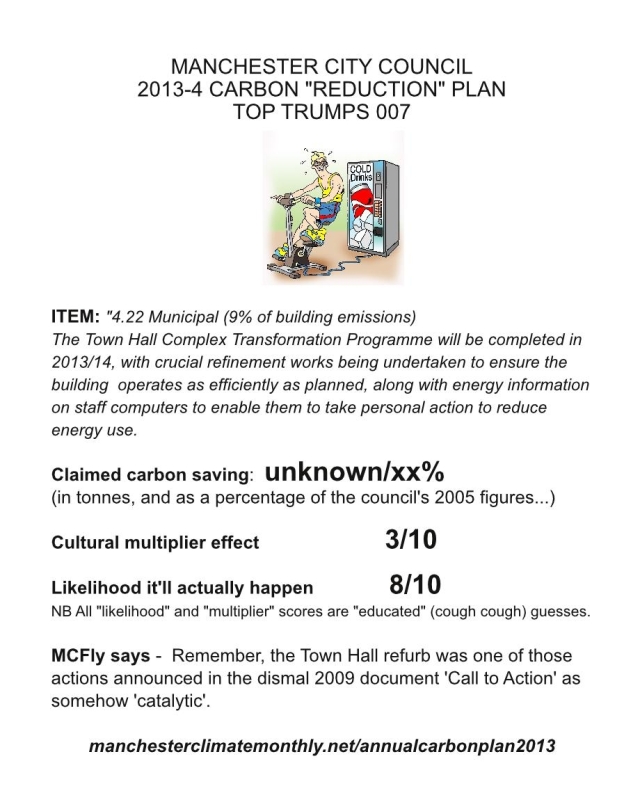 What it says
4.22 Municipal (9% of building emissions)

The Town Hall Complex Transformation Programme will be completed in 2013/14, with crucial refinement works being undertaken to ensure the building operates as efficiently as planned, along with energy information on staff computers to enable them to take personal action to reduce energy use.

3.2.2 The implementation of the Town Hall Complex Transformation Programme will continue throughout 2012/13, with staff then relocating to the refurbished, energy efficient Town Hall Extension next year.

MCFly’s verdict (Is it ambitious enough, is it likely to happen, is this meaningless gibberish/stuff that they were already doing designed to pad out a thin plan, what questions about this “action” are yet to be answered etc etc)

Remember, the Town Hall refurb was one of those actions announced in the dismal London-written document ‘Call to Action’ document (2009) as somehow ‘catalytic‘.  Remember also, buildings are only as “green” as their users.  Already people in Manchester City Centre of a night-time have been treated to the inspiring sight of lights blazing in the Town Hall Extension…

What would a proper three year plan around this item look like? Finding out what ideas people in the building have. Switching off the lights every night – “Every Day is Earth Day”, for instance…

How can culture be shifted around this item? Have environmental awarenes as a standing item on all agendas

What else should the Council be doing around this item?Telling everyone exactly what it owns and what it intends to dispose of

Phone numbers and emails of the organisations n/a

In 2012 Manchester City Council aimed for a 10% reduction in its own emissions. In July 2013 it claimed a 7% reduction. It was able to do this because responsibility for traffic lights moved from its books. Looking at everything else (buildings, transport) emissions went … UP by 1.8%.
So, building on that extremely strong base, the Council’s bureaucrats have proposed a series of actions to help them hit a new “7%” target. You can see the complete list here. Manchester Climate Monthly is going to take a closer look at each and every one of these 44 “actions.”

Twice a week, on “Annual Plan Tuesdays” and “Annual Plan Thursdays” we will be asking a few straightforward questions about each item. And to illustrate each post, we (Marc Hudson and Marc Roberts) are devising “Top Trump” cards for all of these actions. At two a week it will take you until December or so to collect the whole set… So far can’t give you a percentage on the 2005 figure, since the Council has been going off its 2009/10 baseline, in direct contradiction of its own plan.

And throughout all of this, we are asking YOU, the reader, and council tax payer (probably), what YOU think the Council should REALLY be doing… Because next year the council moves to a “three year plan.” And given what we already know of the low quality of the carbon plans and their implementation so far, we, the citizens, will be complicit if we remain silent…

Was print format from 2012 to 13. Now web only. All things climate and resilience in (Greater) Manchester.
View all posts by manchesterclimatemonthly →
This entry was posted in Climate Change Action Plan, Democratic deficit, Manchester City Council. Bookmark the permalink.