2 #fracking clicktivisms for you to sign, after Dave Cameron’s speech today #climate #Manchester

Posted on June 4, 2014 by manchesterclimatemonthly

There’s already a 38 degrees one and a Greenpeace one. No harm in signing both, I suppose. [Update – sigh. One’s a letter-to-your-MP, t’other is a petition. I have replaced petitions with “clicktivisms” in the title. #mustcheckfactsoccasionally]

After weeks of speculation, it’s just been confirmed in today’s Queen’s speech: David Cameron wants to change the law so fracking companies can drill under our homes, without our permission. [1]

The future of fracking in the UK rests on this new law going through. Asked what would happen if the law was stopped, the head of Cuadrilla, one of the biggest fracking companies said:

But the plans can’t go through without MPs voting for it. If enough of us email our MPs urgently today, we can prove to them just how controversial Cameron’s plans are.

It takes 2 mins to email your MP:
https://secure.38degrees.org.uk/fracking-QS

74% of the public in Britain are against changes to trespass laws that would allow fracking companies to drill under homes without permission. MPs will already sense that voting for this new law would risk them votes.

But we need to up the pressure they are feeling. With less than a year before the General Election MPs will think twice before voting for a controversial law that would give fracking companies the green light to drill under their constituents’ homes.

And the more pressure MPs feel right now, as they get back to parliament for the first time this session, the more likely we can stop fracking in the UK for good.

and the Greenpeace one

It’s official: David Cameron today used the Queen’s Speech to launch his plan to change the law. He wants to rob us of our right to stop fracking firms drilling under our homes.

To do it, he’ll have to get the majority of MPs to vote for the plan. But lots of MPs are already unsure about fracking, especially in their own constituencies.

We’ve launched an emergency petition to MPs. If they hear from thousands of their voters that we want them to vote against David Cameron’s plan, they will start to understand what a backlash they could face.

This morning, just before the Queen’s Speech, Greenpeace activists arrived at David Cameron’s very own home and set up a fracking site. 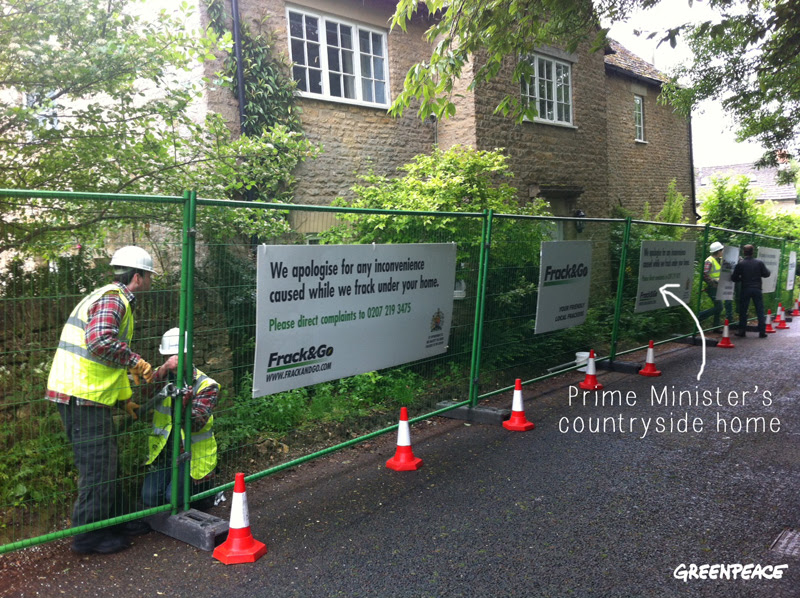 Was print format from 2012 to 13. Now web only. All things climate and resilience in (Greater) Manchester.
View all posts by manchesterclimatemonthly →
This entry was posted in Energy, Fracking. Bookmark the permalink.

1 Response to 2 #fracking clicktivisms for you to sign, after Dave Cameron’s speech today #climate #Manchester