Posted on August 11, 2014 by manchesterclimatemonthly 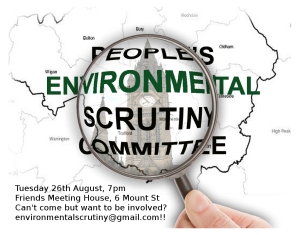 OnTuesday 26th August, concerned citizens of Manchester have a chance to come together, share knowledge and skills and decide what the priorities for the newly-formed “People’s Environmental Scrutiny Committee” should be.

The meeting will take place at the Friends Meeting House, 6 Mount St (behind the central library), from 7pm to 8.30pm.  It’s free, open to anyone who is alarmed by the ever-widening gap between what has been promised and what is actually being done.  It is for people who want to roll up their sleeves and get cracking.

What’s different this time: (1) this is going to be the first of at least 8 regular monthly meetings (they will usually be on Monday nights at the beginning of the weeks when the six scrutiny committees of Manchester City Council meet.  So, for the rest of the year-

(2) There are some very specific goals for each meeting, and also things for people to do after the meeting, whether they can come to it or not (and indeed, if they want to come to meetings. Personally, I hate the things.)

(3) The focus is on people sharing skills and making connections with each other.  It is NOT on getting on a coach to go to a demo in London, or hurling ourselves at the grey walls of Castle Grayskull (also known as “Manchester Town Hall”).

Was print format from 2012 to 13. Now web only. All things climate and resilience in (Greater) Manchester.
View all posts by manchesterclimatemonthly →
This entry was posted in Campaign Update, Upcoming Events. Bookmark the permalink.