#Manchester Council promises to increase staff cycling by 12%… Then doesn’t collect the info!! Where are the promised 1/4ly progress reports?

Posted on November 11, 2014 by manchesterclimatemonthly

And what did they achieve?

“We do not hold this information”

How do we know? Certainly NOT because the Council released the information in a timely and easy-to-digest manner. In July 2014, despite repeated lobbying, they refused to release a report on what they actually achieved of the “Annual Carbon Reduction Plan 2013-4”. It was left to a group of Manchester citizens to submit Freedom of Information Act requests just to obtain basic information about what the Council had (not) done.

And this above is a pattern repeated – they didn’t even bother to collect information, since the promise was presumably just there to bad out the report. And did any of the councillors spot this, ask for follow-up? You know the answer to that one… 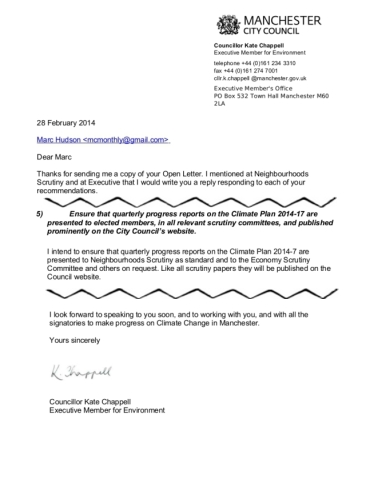 As if that were not enough, in February 2014 the Executive Member for the Environment (a local councillor who has become a member of the 9 councillor “inner core”) promised (among other things) that quarterly progress reports would be produced for the Council’s carbon reduction plans. (see image)

Well, that is still not happening. So who knows how far behind the Council is on its “three year rolling plan”. Who knows if they are, as above, just not doing anything? Not you, not me, and not the councillors who sit on the relevant scrutiny committees. That’s the state of democracy and transparency in this city in November 2014.

What you can do.

Write to your three ward councillors (enter your postcode here to find out who they are), to the Executive Member for the Environment (she’s on maternity leave, but the principle’s the same, cllr.k.chappell@manchester.gov.uk) and to Council Leader, Richard Leese – r.leese@manchester.gov.uk

In February 2014 the Executive Member for the Environment made a public written commitment that quarterly progress reports on the Council’s Climate Reduction Plans would be brought to Neighbourhoods Scrutiny Committee and posted on the Council’s website.

Let us know what, if any, replies you get. MCFly will continue to post examples of the Council making empty promises. We have 14 more examples, just from the so-called “Annual Carbon Reduction Plan 2013-14”.

Was print format from 2012 to 13. Now web only. All things climate and resilience in (Greater) Manchester.
View all posts by manchesterclimatemonthly →
This entry was posted in Democratic deficit, Manchester City Council. Bookmark the permalink.