Book Review: This Changes Everything, by Naomi Klein

Posted on February 7, 2015 by manchesterclimatemonthly

This excellent book review is re-posted with permission from the site of a PhD student colleague.  His site has many other posts as insightful as this one below…

A passage in Naomi Klein’s new climate manfesto, entitled This Changes Everything, stood out to me:

The southeastern [Indian] state of Andhra Pradesh has been the site of several iconic struggles, like one in the village of Kakarapalli, surrounded by rice patties and coconut groves, where local residents can be seen staffing a semipermanent checkpoint under a baobab tree at the entrance to town. The encampment chokes off the only road leading to a half-built power plant where construction was halted amidst protests in 2011. In nearby Sompeta, another power plant proposal was stopped by a breakthrough alliance of urban middle-class professionals and subsistence farmers and fishers who united to protect the nearby wetlands 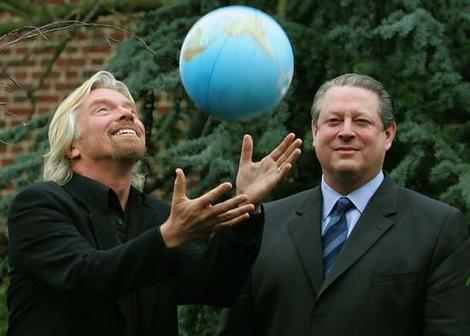 Richard Branson tossed a globe around at a climate change-related press event. Naomi Klein argues that this image is illustrative of the fundamental political problems of climate change: We think we’re in charge of the Earth.

If you’re a bleeding-heart lefty like me, then that quote probably makes you very happy. After all, it ticks all the boxes: Pastoralism, nonviolent direct action, organized peasants, and a vaguely anarchist makeshift checkpoint set up under a tree. This, and other passages in This Changes Everything make climate activism seem like the culmination of all that the left has been working towards for decades. That, in fact, is precisely Klein’s argument: Climate change might be terrifying, but we can solve the problem with the same movements and policies that, by a convenient coincidence, fit exactly with the movements and policies that Klein already supports.

In case you haven’t detected it yet, I should say at this point that I’m somewhat skeptical of this thesis.

It’s not that Klein is wrong. Not exactly. Her argument can be broken down into two premises: Firstly, that climate change cannot be addressed without also changing the neoliberal economic order which prevails around the world today; and secondly, that existing left-wing movements already provide a template for how to create a low-carbon society. Klein’s argument in favour of the first proposition is entirely convincing. One chapter points out how international agreements to deal with climate change constantly run up against the free trade agenda. Another demonstrates how “green billionaires” such as Richard Branson are basically useless: at the end of the day, capitalism being what it is, they have to prioritize their investors over the climate. The first half of the book has a radical premise, but it is extremely well-supported by a unique synthesis of recent environmental history.

But once Klein is finished tearing down old systems, she devotes about a third of the book to building up an alternative. And this is where the problems emerge: Klein abandons the critical approach she applies to the prevailing right-wing order, giving the left-wing largely sympathetic treatment where the climate is concerned. Rather than taking up the difficult soul-searching that will be required to adopt even left-wing movements to the challenge of climate, Klein instead simply presents a series of tropes that have been staples of the left-wing echo chamber for decades. This approach isn’t always off the mark; it’s unsurprising that those who have been fighting against neoliberalism for three decades will have at least some of the answers when it comes to averting the harm it does to the climate. And Klein does indeed point to some promising movements for change. Her account of the role of indigenous movements in stopping pipelines and fracking is particularly compelling, particularly as she draws links between these and other kinds of on-the-ground resistance efforts.

But even in this case, she seems to have half-forgotten about climate change. In many of the cases she cites, the resistance is primarily motivated by concern about the local effects of the fossil fuel industries: Water tables poisoned by fracking, mountaintops destroyed by coal mining, and coastlines threatened by oil tankers. These are very real and pressing concerns, and we should support people fighting back against these harmful effects of the fossil fuel industry. But Klein leaves a very important question unanswered: If these impacts on the local environment are somehow mitigated, then can we still count on this kind of local resistance purely for the sake of the climate? If fracking is made healthier, coal mining is made less destructive, and fossil fuel transportation by ship and pipeline is made safer, then can we expect these movements to stick around purely for the sake of the climate? Perhaps there is an argument to be made that we can, but Klein doesn’t make it.

Another problem is that while Klein spends a good deal of her book excoriating the established environmental movement for its collaboration with industry, she falls hook, line and sinker for some of the cultural baggage that has been holding environmentalists back. Environmentalism, she argues, should be low-tech, democratic, and rooted in the need to protect local ecosystems. Klein makes an absurd comparison between view of conservation inspired by images like Earthrise and the Pale Blue Dot, and the image of Richard Branson holding up a big inflatable globe, as if he’s “in charge” (a favourite term of Klein’s) of the entire planet. If your environmentalism is inspired by an enterprise as technocratic of the space program, Klein argues, then you’re doing it wrong. Much better to fight to protect the lower-case earth: the ground beneath your feet. Klein’s stretched comparison between her own fertility struggles and the struggles of the planet to bring forth life reaffirm this view when she heavily implies that the naturopath she visited was far more effective in helping her become pregnant than the more traditional fertility doctors she had previously tried.

Klein’s fertility treatment is her own business, of course. But when combined with her thoughts about the Pale Blue Dot, it becomes clear that Klein’s book is based firmly in 1970s environmentalism, which was at its heart a reaction to industrial technocracy. This led to a deep distrust of scientists and engineers in favour of a personal, even spiritual engagement with nature. And forty-four years after the first Earth Day, Klein is pushing the same basic narrative, in which science and technology are primarily part of the problem rather than the solution. I bet you can guess what Klein thinks of nuclear power.

The thing is that nothing is that simple. Yes, technology has been poisoning the planet on a large-scale since the nineteenth century, and scientists and engineers have often done more harm than good. But this is not the 1970s, and many of the scientists now sounding the alarm about the climate are part of the kind of large, bureaucratic scientific institution that makes hippy environmentalism so uncomfortable. The engineers developing wind turbines, electric cars, and new kinds of bike infrastructure are also often very establishment figures, many of whom probably lack any kind of spiritual connection to nature. But we need all hands on deck to address the climate crisis. Yes, we need to challenge the prevailing economic order as well as our own rates of consumption. But we also need to leverage every single sustainable alternative we can get our hands on, regardless of whether it is centralized, local, high-tech, low-tech, socialistic, or capitalist. Because the climate doesn’t care about our political and economic preferences.

I don’t really mind if environmentalists prefer to see the planet as a space-ship, a goddess, a super-organism, or even a resource to be exploited, so long as that worldview is mobilized into a willingness to fight. But Klein’s distrust of scientific diagnoses and technological solutions is dangerous. The planet may well need its equivalent of naturopathic doctors who are capable of looking at it holistically and proposing low-tech solutions that take advantage of existing environmental processes. And it certainly needs dedicated activists ready to put their bodies on the line in the fight against fossil fuel companies. But the Earth also needs something more like traditional medicine: lab-coated scientists who use satellites, computer algorithms, and advanced chemistry to diagnose its problems, as well as ambitious engineers who can prescribe high-tech solutions. We need all of the above.

Anybody who has read more than a few posts in this blog can tell that I’m pretty left-wing. And that means that, naturally, I think that left-wing thought is a better approximation of reality than right-wing thought, including the centre-right consensus of the current economic paradigm. But it’s hubristic to think that any political ideology, which is an imperfect product of political alliances and historical contingencies, provides the perfect analysis of or solution to climate change, which is bigger than any political debate. Klein is probably right that right-wing ideology is inseparable from the practices that are causing climate change. But just because we on the left are more sympathetic to the problem, it doesn’t mean that we, too, won’t have to make political sacrifices. Real action on the climate demands that we seriously reconsider our positions on things like gentrification and technocracy. We need to fit our concern for the oppressed into the harsh facts of climate change, and find ways to help them that don’t make the problem worse. This difficult task is what Klein misses in her book.

Was print format from 2012 to 13. Now web only. All things climate and resilience in (Greater) Manchester.
View all posts by manchesterclimatemonthly →
This entry was posted in Book Review and tagged ecological modernisation, Naomi Klein, social movements, This Changes Everything. Bookmark the permalink.

13 Responses to Book Review: This Changes Everything, by Naomi Klein