Posted on March 5, 2015 by manchesterclimatemonthly

Manchester City Council used to make its climate promises in July. In 2013 it promised, among many other things, there would be a “refresh of Low Carbon Plans, both top-down, at a Directorate level, and bottom-up, from an individual team level.”   Sounds great, doesn’t it. And is also a tacit admission that things haven’t gone well (why else would a ‘refresh’ be needed?) 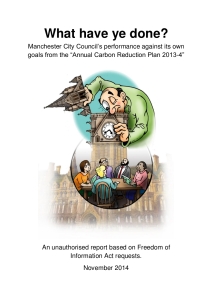 infamously DIDN’T report in July 2014 about this promise, and 60 or so others. Citizens then submitted Freedom of Information Act requests and a report “What Have Ye Done?” was produced, which showed that on many promises the council hadn’t even collected the data to see if it was on target, and on many others it had simply not done what it said it would (5 events during Climate Week 2014, for example.)

A follow-up series of questions has been asked about a few remaining items. After the usual bureaucratic delay, answers were received.  Below is indicative of the style of the Council’s answers.

“8. With regard to 4.78 of the Council’s Annual Carbon Reduction Plan 2013-14, was there “a refresh of Low Carbon Plans, both top-down, at a Directorate level, and bottom-up, from an individual team level.”  If not, why not.  If so, where can they be found on the Council’s website.

Directorate and Service level plans will include actions to reduce carbon emissions where relevant. As part of the Council’s roll out of Carbon Literacy training to staff some teams developed group as well as individual actions.”

The rule/habit seems to be

a) avoid admitting, where possible, that actions have not, in fact, taken place,
b) make vague promises about future action.

And this is how the Council intends to build the credibility and learning that it will need to help us all cope with the horrors to come.  How do the people responsible for this, and the people who could change it, sleep?  How?

Was print format from 2012 to 13. Now web only. All things climate and resilience in (Greater) Manchester.
View all posts by manchesterclimatemonthly →
This entry was posted in Democratic deficit, Manchester City Council. Bookmark the permalink.