Posted on November 5, 2015 by manchesterclimatemonthly 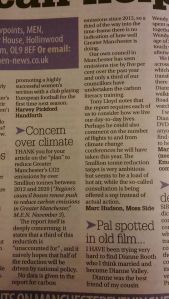 Thank you for your article (MEN 3rd November “Region’s council bosses renew push to reduce carbon emissions in Greater Manchester”) on the  “plan” to reduce Greater Manchester’s CO2 emissions by over 5 million tonnes between 2012 and 2020. The report itself is deeply concerning; it states that a third of this reduction is “unaccounted for” , and it naively hopes that half of the reduction will be driven by national policy. No data is given in the report for carbon emissions since 2012, so a third of the way into the time-frame there is no indication of how well Greater Manchester is doing. Reduced emissions and carbon literacy are given as two desirable outcomes in the report; our own council in Manchester has seen emissions rise by 5% over the past year and only a third of our councillors have undertaken the carbon literacy training.
Tony Lloyd notes that the report requires each of us to consider how we live our day to day lives. Perhaps he could also comment on the number of flights to and from climate change conferences he will have taken this year (Take the train, Tony!). The 5 million tonne reduction target is very ambitious but seems to be a load of hot air, while the so-called consultation is being offered a sop instead of actual action.

With thanks to somebody…

Was print format from 2012 to 13. Now web only. All things climate and resilience in (Greater) Manchester.
View all posts by manchesterclimatemonthly →
This entry was posted in Letters to the MEN, Low Carbon Culture, Low Carbon Hub, Manchester City Council and tagged carbon literacy, Tony Lloyd. Bookmark the permalink.