Posted on March 9, 2016 by manchesterclimatemonthly

Three of the six councillors who chair important* committees that are supposed to keep tabs on Manchester City Council have not completed either part of the  “Carbon Literacy” training that has been on offer since 2013.  One other has only completed the face-to-face component.

At the moment five of the six committees basically shun all matters environmental, including climate change (This is of course the type of short-sighted siloed thinking that got the species in this mess, but never mind).  One committee- Neighbourhoods – is supposed to deal with climate, but has signally failed to do so properly for many years.   Meanwhile, important issues are ignored or swept under the carpet, and the implications of climate change for health, for young people and community cohesion (for example) are ignored. 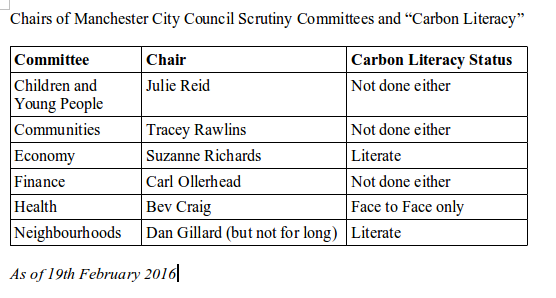 Given the total lack of any opposition party councillors, there was a supposed to be an effort for the councillors to – in the words of Richard Leese [who also hasn’t done his carbon literacy training) –

“We have to ensure we hold ourselves to account within this chamber and we also need to ensure that citizens – and people that have voted for us – are able to hold us to account on an ongoing basis, not just once every 12 months. So it is a challenge. I think it is a challenge for every member of this council but I believe we will demonstrate that as a Labour administration, the people of Manchester were right to put their trust in us.”

And on climate change?  Accountability? Trust?  Why would we do that?  Anyone?

Was print format from 2012 to 13. Now web only. All things climate and resilience in (Greater) Manchester.
View all posts by manchesterclimatemonthly →
This entry was posted in Democratic deficit, Manchester City Council, Uncategorized. Bookmark the permalink.