Posted on January 14, 2017 by manchesterclimatemonthly 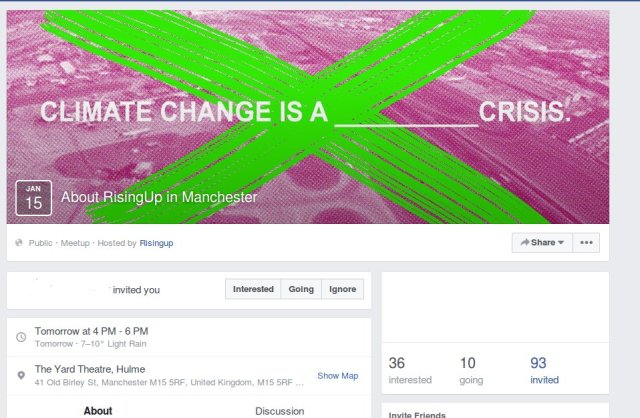 This is kinda short notice, but there is a meeting for another new group – “Rising Up”, tomorrow, (Sunday) 15th January at the Yard Theatre in Hulme 41 Old Birley St, Manchester M15 5RF, United Kingdom, M15 5RF

Our Statement of Necessity

We are initiating and promoting campaigns of civil disobedience in the UK, which may include the breaking of laws. Our movement is explicitly nonviolent and we intend no harm to any person. We believe this is necessary as a means to respond to scientifically attested ecological threats and to challenge gross social injustices; as has happened many times in the past such as with the suffragettes, the civil rights movement in the USA, the Indian Independence movement, and the Rights to Roam in the UK. We stand on the shoulders of those movements. We stand within these traditions and learn from them.
For many of us these actions are motivated by spiritual beliefs as Pagans, Quakers, Buddhists, Jews and so on. We are called to act in service of a higher authority, a higher purpose or on behalf of the Mother Earth.

Through our action we seek to bring about
– A functioning democracy based on informed consent. We do not believe we have a functioning democracy in the UK. It has been captured by corporate and private interests and the media is owned by wealthy billionaires who use their power to systematically undermine informed public debate.
– Transformation of the political system, society and economy to ones which maximise well-being and minimizes harm. The existing political and economic system is set to destroy civilisation and much if not all life on earth if allowed to continue. This is most apparent in our society’s inability to cut the carbon emissions which are creating catastrophic  climate change, and through its reckless destruction of bio-diversity.
-A society of genuine equality without poverty and privilege. At present UK is becomes ever more grossly unequal due economic arrangements which vastly favour the wealthy elites.

No particular individual or group is responsible for this state of affairs. The problem is the whole system. It is out of control to the extent that it necessitates nonviolent civil disobedience as a means to prevent disaster and create the sane and equitable society we all desire and require for ourselves and future generations.

MCFly says:  Interesting.  This group seems to have called a meeting on very short notice.  They didn’t contact Manchester Friends of the Earth to advertise it in weekly digest that goes out to about 1000 people.  They seem not to have sent it out very widely at all.  So who is supposed to be participating in this participatory process??  Doesn’t mean that everything will go tits up, but, well…

Anyways, it will be interesting to see if this

a) has a plan for systematic capacity building and the exchange of skills and knowledge, and

b) lasts any longer than “Reclaim the Power” that was going to be all-singing all-dancing and bring about the glorious eco-revolution like NOW.  And then held a meeting with three punters… and no organisers.  Haven’t heard much from them since…