Carbon Coop – “transition is complex, and we want to run events reflecting that”

Posted on October 17, 2017 by manchesterclimatemonthly

Readers of MCFly and another site will know that bad meetings – where hardly anyone can ‘meet’ because the organisers are in effect feeding the attendees to the speakers as ‘egofodder’ – are a sore point. So few of the organisations that say they are tackling climate change are trying to innovate in their formats, and so people come and go, alienated and frustrated but not necessarily knowing why, or knowing but giving up.

So, when Carbon Coop, the Manchester-based outfit that is helping individuals and groups cut their carbon footprints, announced it was holding a ‘Great Energy Debate’ [November 6, free, book here] , there was a sigh of relief at MCFly Towers when the ‘sage on the stage’ format of experts telling rows of people The Truth was to be subverted.  Here is an email interview with Jonathan Atkinson, one of the people behind Carbon Coop… 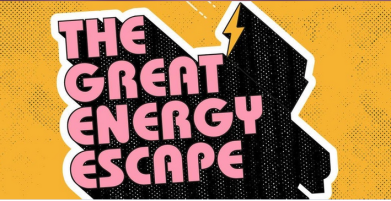 1. The format for November 6  is a little different from the traditional
panel and Q and A. Why are you tweaking the format?  (i.e what is wrong
with the status quo)

A bit of background about the event. We’re running an immersive game for families and young people at the Manchester Museum as part of the Science Festival this year – http://greatenergyescape.carbon.coop/

The game is all about the complexities of the energy system transition we’re experiencing and the different decisions, balances and prioritisations that will need to be made in future. Obviously, as it’s a game we’ve had to simplify some aspects and tailor the game for the audience – this follow up event is for those who have visited the game or heard about it and want to dive in to the detail.

Because the transition is a complex and changing process we wanted to run an event that reflected that complexity – as such, it’s not about three experts ‘telling it like it is’ instead we want to pool and harness the knowledge in the room. This means involving attendees as participants, using small group discussions and reflections as part of an

Where do the tweaks come from? (own experience, pure experiment?)

Actually, whenever we do an event or speak at an event we try and think around more participatory formats and exercises. This can be very simple, like a show of hands, or 2-3 minutes for attendees to introduce themselves to each other in small groups, but ideally there is small group discussion and debate filtering through to some kind of debate and dialogue.
I spoke at a Community Energy conference in June and prior to the event I solicited views via Twitter and then shared them in the conference, with many of the people present, that was a great way to get people thinking.

We also keep our eyes open for new formats, techniques and tools to try and keep things fresh, and obviously rip off ideas from other events we attend that have been successful in some way – sadly the most innovative stuff is often happening in other sectors, eg there is a lot of new, interesting thinking in health and social care, especially around the role of ‘social movements’ in involving people in non-traditional primary health care activities.

Are you worried that some people might be uncomfortable with the change,
at least initially?

Never! Maybe, when you ask them to break in to small groups. there’s a second of puzzled bewilderment crossing their faces, but actually people love to talk and interact, and when you give them permission to do this you help them overcome the natural barriers of shyness and awkwardness. The biggest issue is shutting them up, which I always feel bad about, because in some ways that should be what an event like this is all about!

What does success look like for this meeting? How do you intend to
measure it?

On a base level, success is about a cacophonous room filled with animated discussion and laughter. On a more practical level, success is measured in attendees, in the diversity of these attendees (measured in a variety of ways) and in terms of interaction.
Carbon Co-op operates by ‘Carver Governance’ or ‘Policy Governance’, and as a result we have a set of ends we aim to measure our activity against, around carbon reduction but also around collective action, energy justice and government collaboration. We measure everything we do against these. So this event will be measured via a qualitative report/write up and quantatitive data from a post-event survey. The evaluation of this data will be shared on an annual basis in the form of something similar to a Social Impact report, covering all our activities.
Anything else you’d like to say?

Please come to the event – it’s going to be really interesting.
MCFly will be there on the 6th November and will write an event report (though probably not as quickly as Carbon Coop itself – these guys are on it.  Meanwhile, wouldn’t it be great if the example set by Carbon Coop could be picked up by some other groups.  But they mostly lack the brain, spine, heart…

Was print format from 2012 to 13. Now web only. All things climate and resilience in (Greater) Manchester.
View all posts by manchesterclimatemonthly →
This entry was posted in Campaign Update, Upcoming Events. Bookmark the permalink.

1 Response to Carbon Coop – “transition is complex, and we want to run events reflecting that”