Posted on January 15, 2018 by manchesterclimatemonthly

Green Party activist and political thinker Derek Wall will be in Manchester on Monday 19th February.  He’ll be talking about his new book Elinor Ostrom’s Rules for Radicals: Cooperative Alternatives beyond Markets and States (reviewed here).  You can book your tickets here. 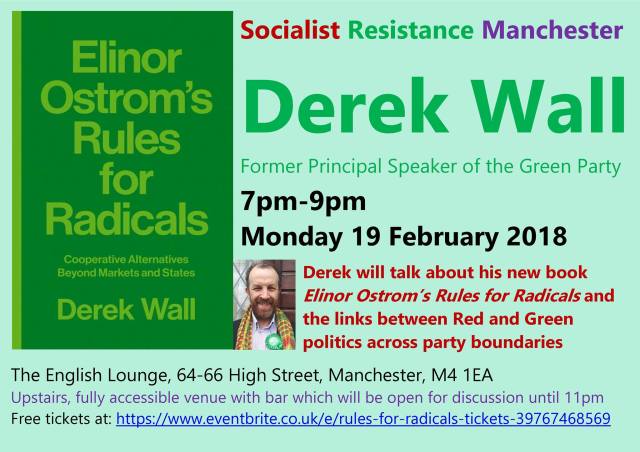 MCFly caught up with him for an email interview-
1.  So, who was Elinor Olstrom and, in 100 words or so, why should someone concerned about climate change care?

Elinor who sadly died in 2012, was the first woman to win a Nobel Prize in economics.  She was a passionate advocate of climate change action and she won the price for her ecological economics.  Specifically she studied the tragedy of the commons and researched how it could be over come.  To me this is at the heart of climate change question and she provided a scientific (but open) approach to tackling this crisis and other environmental problems.

The tragedy of the commons is the concept that collective ownership leads to catastrophe.  Forests, fisheries and common land it has been argued tend to get destroyed from over use if they are owned collectively.  Elinor won her prize for showing that local people can construct rules and systems for conserving the commons and that far from being tragic commons tend to protect nature,

She scaled her study of the local commons to look at the global commons, coming up with practical ideas of promoting climate change action. She was fascinated by how the right kind of practices could encourage cooperation and protect the environment,. She was practical person and campaigned for climate action, stuck solar panels on her home (which incidentally she and husband Vincent built), saw indigenous people’s protection as a way of tackling this and other ecological problems.

2.  If we took Ostrom’s ideas seriously, how would the Labour Party’s manifesto look different?

It would be less about the state stepping in and more about community control.  It would reject nationalisation as a universal solution and promote commons, cooperatives and other diverse forms of popular ownership as an alternative to neoliberalism.  It would certainly stress ecological policies as well as coproduction. Coproduction is the concept that health care, social services and, in fact, all areas of society should be shaped by users desires not just centralised paternalism.  While Ostrom was not on the traditional left, I think she would have loved the approach of Jeremy Corbyn and John McDonnell when it advocates participation rather than state paternalism.  I have written a brief account of how we might imagine her advising Jeremy Corbyn https://www.plutobooks.com/blog/elinor-ostrom-advice-jeremy-corbyn/

3.  How would the Green Party’s manifesto look different?

There would be less of it for a start.  It would be shorter The Green Party at its two conferences a year has since it was created in the 1970s (originally it was called the Ecology Party and before that People) created a mountain of policies dealing with most aspects of life.  While not all of these get into election manifestos the approach is very much of piling up policies that the state will implement.  An Ostrom approach is not radically anti-state but puts participation and deep democracy at the centre.  Ostrom argued that we have to teach the tools of cooperation and participation at school and change institutions and property rights to promote collective, diverse democratic control.  Obviously in any manifesto she would be looking for us to construct sets of rules that make for ecological sharing.  Making academic publications open source would be big in any Ostrom inspired manifesto.  Community ownership of renewable energy would also be a pillar and famously she argued for looking at all manifesto promises in terms of their long term impact

I am deeply indebted to the indigenous peoples in the US who had an image of seven generationsbeing the appropriate time to think about the future. I think we should all reinstate in our mind the seven–generation rule. When we make really major decisions, we should ask not only what will it do for me today, but what will it do for my children, my children’s children, and their children’s children into the future.’

4.  How would Green Party praxis (sorry, ‘day to day campaigning’) look different?  How would we know we were in post-Olstrom campaigning mode?

Totally different!  The Green Party doesn’t think enough about method.  Being for good things and against bad things is inadequate.  Strategic thinking about how to achieve change should be at the core of Green Party politics and this would go beyond standing in elections and assuming that at some point in the future a Green government would transform society.  Green Party politics from an Ostrom point of view would be about promoting direct, diverse and deep democracy and understanding how institutions and rules can be changed to do this.  The small things like running meetings, educating members and enjoyment of party activity for Ostrom would be the big things.  If you think carefully about how to promote participation by members the big social change will be easier.  Elinor was sceptical of slogans, her anti-slogan slogan of ‘No panaceas’, is worth repeating, simply electing Greens will not on its own transform top down and anti-ecological power structures.  Its not that the Green Party has the wrong approach to these questions but simply that the Party doesn’t generally discuss them at all.  Its been great seeing the Green Party moving left over recent decades, I would love to see it deepen what it does by taking on Elinor’s insights and inspiration.

5. Why should people come along to the book launch – what will they get out of it.  How will it be structured in congruence with Olstrom’s ideas

Hopefully pleasure and ideas.  At the London launch I brought my homebrew IPA to share and I intend to bring a couple of bottles when I am in Manchester.  I will certainly leave lots of time for questions and participation rather than just, despite my enthusiasm, lecturing.  We can see where people want to take the discussion and how it might hopefully promote both thought and local action in Manchester.  And Ian Parker who kindly has organised it and myself are very open to suggestions for making it the full Ostrom so to speak.

I have been provoked and made to think deeply by Elinor Ostrom.  She was an inspired thinker, ecological politics was at the centre of her work and she argued for genuine participation, thought practically about how to achieve this and advocated good natural and social science as alternatives to sloganizing sentiment.

Was print format from 2012 to 13. Now web only. All things climate and resilience in (Greater) Manchester.
View all posts by manchesterclimatemonthly →
This entry was posted in Upcoming Events and tagged Derek Wall, Elinor Ostrom, Green Party. Bookmark the permalink.