Posted on November 15, 2018 by manchesterclimatemonthly

Councillor Angeliki Stogia, the Executive Member for the Environment of Manchester City Council, has stated baldly that cancelling the quarterly climate reports was the right decision. It sends, she says, the right message about how seriously Manchester City Council takes climate change.  No, you read that right. It’s not a typo, or a misrepresentation.  And we’ve got the tweet (screengrabbed below) to prove it.

The quarterly climate reports were started in 2014, after pressure and lobbying from a small group of environmentalists. They were a supplement to the existing annual reports, which often received limited scrutiny and did not enable councillors to see if things were ‘on track’ or not throughout the year.   In May this year, Cllr Stogia cancelled the reports, which were being presented to the Neighbourhoods and Environment Scrutiny Committee.

Curiously, there are two competing explanations for the cancellation.  Councillor Stogia announced repeatedly that they were cancelled because not all data could be collected in a timely manner. 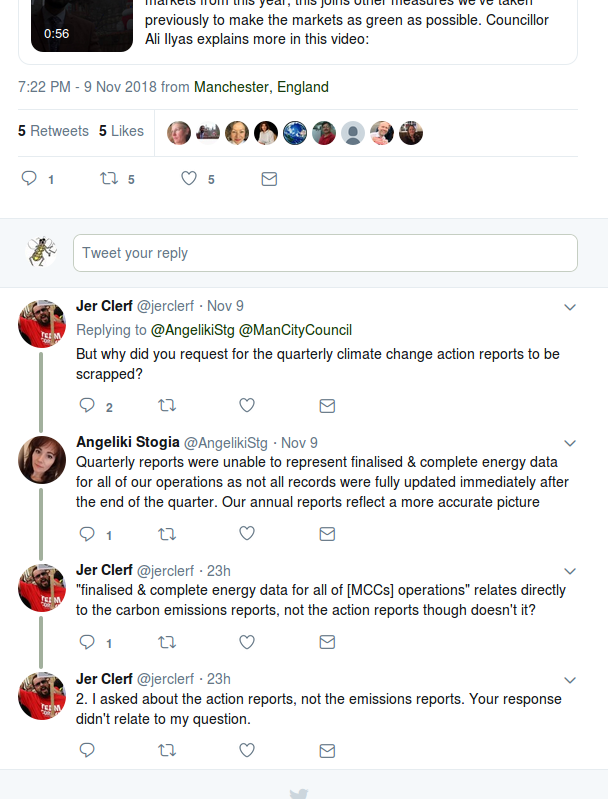 Manchester Climate Monthly had previously submitted a Freedom of Information Act request to see all the correspondence relating to this.  The evidence we were sent had nothing to do with inaccurate/incomplete data, but rather a conversation about how many times the quarterly reports were being downloaded.

The reply, received on 8th November, read in part

The decision to stop producing the quarterly Climate Change Action Plan
reports was made on 30 th May 2018. Preceding this, the Executive Member
for the Environment was provided with information regarding the number of
‘hits’ the quarterly reports on the Manchester City Council website had
received. Email correspondence between David Houliston and the Executive
Member is enclosed.
b. Secondly, please provide any evidence that alternatives to abolishing
quarterly plans was considered: e.g. quarterly plans without all the data
or six monthly reports.
None applicable. An annual carbon emission report is already produced and
published on the council website.

I have just received the result of a Freedom of Information Act request about your decision to abolish quarterly climate action plans to the NESC.
I am writing to you for a statement (for publication) about this decision.
1. In light of the recent IPCC report about the need to take radical action to keep global warming below 1.5 degrees, do you think that abolishing the quarterly reports was a good decision?

2. Does it sent the right message about how seriously the council takes the issue?

Many thanks in anticipation of your reply

There was no reply.  So that email was screengrabbed and tweeted with Councillor Stogia’s twitter handle.  Despite being retweeted by other people, and a further tweet, still no reply.
This morning I sent another tweet (from my personal account).  This time, with no explanation or apology for the week’s delay in answering three simply questions, I got this reply
The answer is yes to all the questions you asked Mark 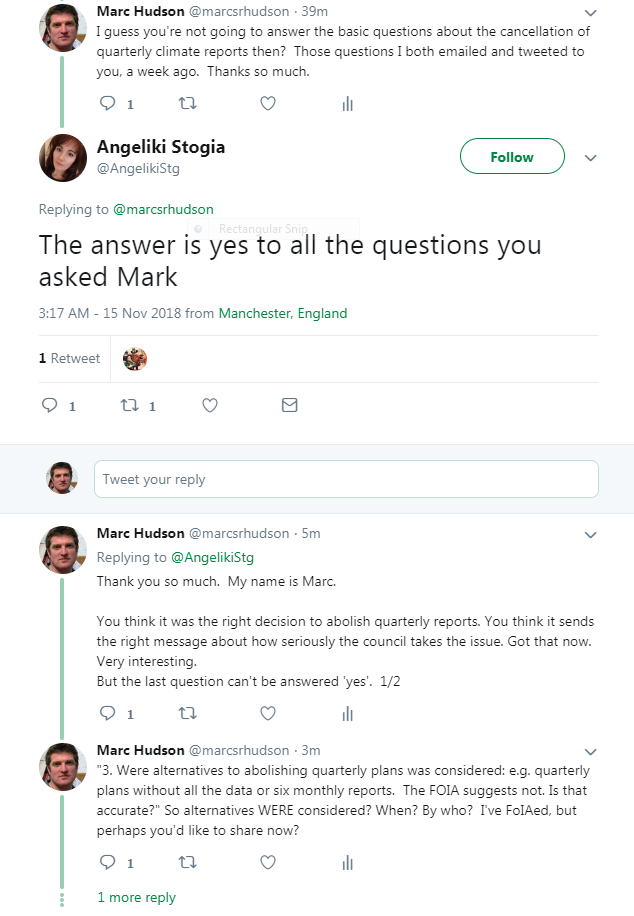 As indicated in the above exchange, a further Freedom of Information Act request has been sent, to try to find ANY documentation relating to this decision.  It is now being handled as an “internal review”, with the answers due on 7th December.
Perhaps the Manchester Evening News, in stead of essentially reprinting press releases, might like to follow up on this?  Yeah, right.

Was print format from 2012 to 13. Now web only. All things climate and resilience in (Greater) Manchester.
View all posts by manchesterclimatemonthly →
This entry was posted in Neighbourhoods and Environment Scrutiny Committee, quarterly reports. Bookmark the permalink.