@kidlit4climate – who, what, how you can get involved #YouthStrike4Climate #climate

Posted on March 26, 2019 by manchesterclimatemonthly

Tell us a little about yourself – who are you, how did you get into the children’s illustrator/author job, what have been some of your books/projects?

Hi! My name’s Emma Reynolds, I’m a children’s illustrator and author based in Manchester. I have a background in children’s animation as a character designer, and I’ve also taught at Stockport College on the illustration degree. I am now a full time freelancer working on my first illustrated children’s book out in 2020 with Simon and Schuster. My books are inspired by nature, adventure and animals.

When did you first become aware of the seriousness of climate change (when did it emerge from the “background noise”). What other things have you been involved in?
I’ve always been keenly aware of endangered animals since I was a child, and in the 90s when my friend and I were 9 we organised a craft fundraiser to sponsor a rhino at our local zoo. I’ve known climate change was an issue for a long time, but ‘the big fear’ I would say hit me around ‘Blue Planet 2’ time in 2017 when the impact humans were having was driven home. Boiling point for me was three weeks ago (very recent!) on an unusually hot February day, and that’s when I decided I wanted to do more, and started the #KidLit4Climate campaign.

What are your favourite kids’/young adult books that engage with climate change?

Lily Williams makes brilliant accessible books about climate change. In her series ‘If Sharks Disappeared’ and ‘If Polar Bears Disappeared‘, they explain how one animal’s role in the ecosystem affects others around them, and of course eventually humans too. The books end with lots of things we can do to help as individuals, which I think is important as climate change is overwhelming, and tangible steps are important.

It is very new! Three weeks ago I was walking through Manchester on a February morning in temperatures we normally only experience in summer, and I thought ‘When am I going to do something? I don’t want to look back and wish I’d done something sooner.’ I don’t claim to be a climate expert, but I knew that this campaign was something I could amplify within my field of work, so I decided to go for it and start there.

#KidLit4Climate is a campaign for authors, illustrators, publishers and bookshops to stand in solidarity with the young people we make our books for. I invited people to share the logo and voice their support, and to create an illustrated protestor to form a ‘Virtual Protest’ to coincide with the global climate strike on March 15th. 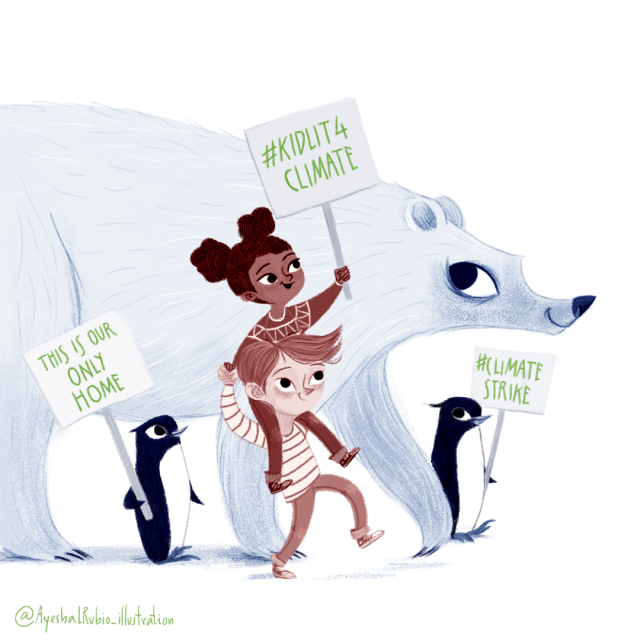 What it shows me is how people are desperate to show their support for the youth climate strikes and the young people we make our books for, and this gives them an outlet for that. It has been wonderful feeling a sense of community and hope from so many countries, with many world renowned authors and illustrators showing their support.
I hope that lots of young people see that we are listening and stand with them, and that we can continue to amplify their message as the strikes and campaign continues.
You can see all the illustrated protestors on the instagram hashtag #KidLit4Climate

What kind of ways can people be involved?

The campaign is ongoing, and all of the ways to get involved are here on the website –
emmareynoldsillustration.com/kidlit4climate
Follow us on Twitter KidLit4Climate
And on Instagram KidLit4Climate
Watch the video here
to see what we’ve been up to so far!

KitLit4Climate exploded in a way I wasn’t expecting, and as such it is evolving all the time. I’d like to thank each and every person that has sent words of support for the young people striking, and created an illustration to stand with them for our planet.
I would love to directly amplify young people’s messages – So if you’re a campaigner reading this, please email me at kidlit4climate@gmail.com I’d love to hear from you and make this a key feature across our social media. Thank you so much for all that you’re doing. We stand with you.

Was print format from 2012 to 13. Now web only. All things climate and resilience in (Greater) Manchester.
View all posts by manchesterclimatemonthly →
This entry was posted in Campaign Update, Interview. Bookmark the permalink.