Posted on June 30, 2019 by manchesterclimatemonthly

Describe a little about who you are (where/when born, jobs done etc), and when you first became involved in ‘environmental’ issues 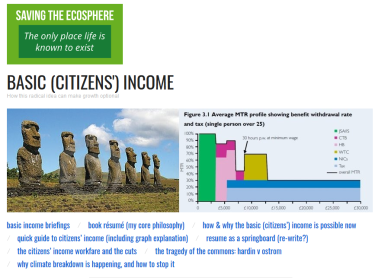 I grew up in Lancashire. Being 84, I was at junior school during WW2. My mother died suddenly, and so far as I was concerned without warning in 1945, when I was 10. Moral: you can never take apparent certainties for granted. This makes it easier for me to realize how apparently normal behaviour can destroy the ecosphere.

I was a Probation Officer for 30 years (now retired for almost as long). I was predisposed towards the universal basic income (UBI) because I dealt so often with the demoralizing effects of the poverty trap created by means testing.

What are the main issues facing our species, in your opinion? What success have “we” had in dealing with those issues. If “not much success”, then why do you think that is?
The switch from strategies for growth to strategies to preserve the ecosphere. Strategies appropriate for growth were advantageous to humans for many millennia, but the exponential principle brought that epoch to a sudden end.

You have seen various waves of environmental concern wash through the public/media/policymakers, usually leaving a residue of laws which are not enforced, policies not implemented. What do you think we can do to ensure that the current wave of climate concern doesn’t go the same way as the previous waves?
Specifically, growth strategies have persisted long after they became toxic, because:

If you could have the undivided attention of “the environmental movement” for two minutes, what would you say?
The universal basic income (UBI) does not solve this single-handedly, but is an important element because it guarantees necessities, and gives everyone (persons, etc.) ‘an identity of interest when faced with ecological limits (An expression taken from ‘Poverty and Progress’, a book written by Richard Wilkinson in 1972).

Anything else you’d like to say.
I fear my mind works differently from most others. I am not cleverer – I am hopeless at many practical tasks obvious to everyone else. But I am extremely distressed by the chorus of those who foresee an ecological crisis as clearly as I do, who reject my insistence (erroneous belief??) that a start could have been made on defusing the current existential threat when the Massachusetts Institute of Technology flagged it up in 1972.

My weblog http://www.clivelord.wordpress.com has become jumbled, as it tends to follow topical events, but a more detailed, coherent case can be found there.

Was print format from 2012 to 13. Now web only. All things climate and resilience in (Greater) Manchester.
View all posts by manchesterclimatemonthly →
This entry was posted in Interview. Bookmark the permalink.