Posted on November 28, 2019 by manchesterclimatemonthly

An excruciatingly long meeting of Full Council (1) happened yesterday. Marc Hudson, editor of Manchester Climate Monthly, sat through it so you don’t have to. Climate change came up repeatedly, and there are four (2) key points to be briefly (sic) covered.

One function of council is for a morale boost/spin-stiffen to backbench councillors. So, a presentation is organised about an issue du jour (I once sat through an HS2 advert. That was fun). Yesterday Pete Bradshaw, the sustainabilty bod at Manchester City Football Club was along, to give an interesting talk about the impressive things (and I am NOT being sarky) the club has been doing on, for example, single use plastics, and PET plastics, and its lighting (switching to LEDs) (see update below). Bradshaw was careful not to make sweeping claims, and talked a lot less (i.e. not at all) about the club’s carbon dioxide emissions from flights and those of its supporters. He spoke not at all, for example, about how the club flew players to Brighton and back in a night this May, 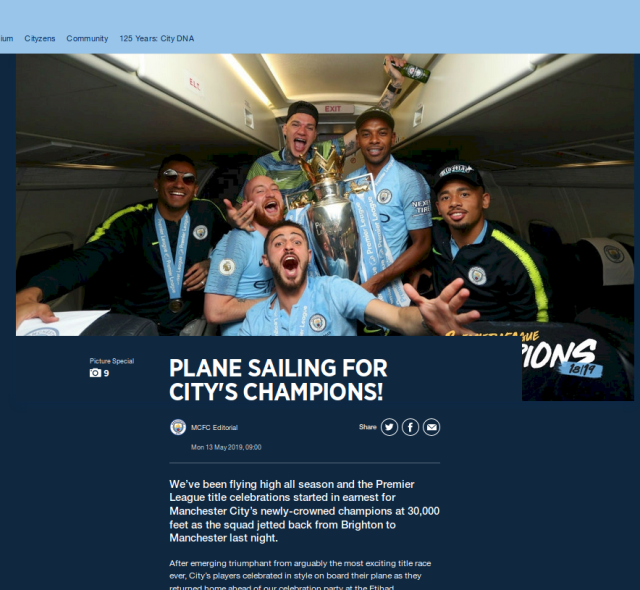 and no councillor had the temerity (or knowledge?) to mention it.  (And to head of any fans who may feel aggrieved – I am sure the Reds are worse, and we’re ALL of us hypocrites).

In the Q and A to him there was a prepared question from the Executive Member for the Environment inviting Bradshaw to talk about good businesses (making pledges, taking part in the ‘Manchester Climate Change Board’ (3)). This is clearly part of a narrative that the the “leadership” of the  Council is trying to build – “we the council are doing our bit. Blame business if it isn’t.” The problem with this is that a)  as a whole business in Manchester has never been interested in climate change and the environment, going back to the mid-90s and Local Agenda 21 and b) Manchester City Council has not, over the last ten years,  used its muscle to get them interested (4).  Generally business only gets involved in the horrorshow messiness of environment policymaking (as opposed to staff-tree-planting etc) if one of two conditions apply

a) the government is about to wave a big regulatory stick

b) there’s loads of grants (taxpayers’ money) that can be hoovered up and called research and development.

Neither of those conditions have ever really applied in Manchester (4 again).

That presentation/Q and A was followed by a VERY interesting short presentation by a senior officer on the council’s work on added social value. More on that another time.

The one almost-saving grace of full Council is the questions to the Executive. These can come from friendlies (i.e. Labour backbenchers) and are known in the civilised parts of the world as ‘Dorothy Dixers.’ A classic Dorothy Dixer yesterday came from Chorlton Park councillor Eve Holt (who had seconded July’s climate emergency declaration, which was in itself based on an earlier effort by her to get a declaration up. This was before other core cities had declared climate emergencies, and when Manchester’s bosses were still determined to block. Ah, fun times)

At 1 hour 39 minutes(here’s the video) she asked Exec Member Gavin Bridges (Children’s Services – schools, etc) what his department was up to. The (unashamedly scripted) answer did have a certain about entirely predictable wilful blindness about Manchester Labour’s failure these last ten years, (and entirely justified blaming of austerity and the Coalition/Conservative governments since 2010. )

There were various useful nuggets – a follow-up youth climate conference is happening, after July’s effort (btw, in the 2009 Climate Action Plan, there were supposed to be regular youth conferences. Those never happened) Okay, so this wasn’t the cut and thrust of parliamentary debate, but at least, for once, useful info was released (and information on climate change by Manchester City Council has often tightly controlled and bottlenecked, which is a sign of stupidity and panic. But I digress)

Useful info was NOT on display in our last two examples. Skipping out of chronological order –

the leader of the Liberal Democrats, John Leech (Didsbury West) asked Richard Leese (leader of the council since 1996) about the practice of fuel-tankering – airlines carrying extra fuel to save money when flying to airports where fuel is more expensive, but with a cost of extra carbon dioxide emissions because fuel weighs a lot. Leech wanted to know whether Leese had raised the issue with the top bods at Manchester Airport Group (fun fact – Manchester City Council own 35.5 percent of MAG, and gets 45 million quid a year in dividend, which goes someway to plugging the enormous budget holes created by Coalition/Conservative governments).

Leese could have gone “yeah, I saw that report too and it sucks, so I got on the dog and bone right away.”

But nope, that would be too sensible, not partisan enough. Instead there was the usual ‘yeah but no but, well what have YOU been doing?” stuff that fills voters, if they’re watching (and tbh they aren’t) with anger and exasperation (5)

This came after though, one of the most contemptible things I have seen in full Council, or any other meeting of Manchester City Council over the last ten years (and that is saying something).

The question was this

“After the climate change emergency motion was passed by full council [in July], on what date did the Executive Member for the Environment commission the work by the Tyndall Centre on the viability of moving the target date for zero carbon target to 2030?”

Rather than give the kind of simple factual answer that Bridges had given, or the Executive Member for Finance (Carl Olerhead) had given earlier, Angeliki Stogia (Labour, Whalley Range) just ineptly and incoherently slagged off the Liberal Democrats and said ‘Labour is great’ to the horror and disbelief – if body language is anything to go by – of a sizeable number of Labour councillors.

The Lord Mayor asked Kilpatrick if he has a supplementary. So he (sensibly enough) asked exactly the same question. Stogia then slagged off the Didsbury West ward plan (8) while Still. Not. Answering. A. Very. Very. Straightforward. Question.

All this was so tawdry and indeed pitiful that you felt unclean just watching it, let alone enraged. Not even the most hardened partisan Labour hack could watch it without wincing: if Boris Johnson had done put in such a transparently shoddy and infantile performance, even he might have blushed. I am not exaggerating.

This, this is the leadership displayed on climate change? What damage is being done to the Council’s credibility? What ruins will be left when – sooner or later – some other councillor has to take over the Environment portfolio?

(1) Manchester City Council is made up of 96 councillors. 93 of them are Labour 3 of them Liberal Democrats. This meas nothing ever comes close to not being nodded through at full council, which meets 6 or so times a year and is largely for show. The only one where it’s a bit tense is after the elections, in late May/early June. That’s when the various posts (chair of this, exec for that) are up for grabs. Decisions get made by the 10 member executive, which meets more frequently. But more of this another time.

(2) In the failed second amendment (see here), climate was mentioned in both the “proposer” and “seconder” speeches, which presumably had been written and agreed by a committee (small c). So, Labour at least realises the current electoral salience of the end of civilisation. That’s “progress”, isn’t it?

(3) Another opaque and unaccountable stab-vest/quango. Nobody now mentions it, but the stakeholder steering group for climate action was supposed to have some members elected at the annual day-long stakeholder conference. Elections were never held, and the day-long conference was abolished in 2014. This is Manchester, we do things the same as any other scared and unaccountable council here.

(4) Since the “economic growth/inward investment at all cost” mob defeated the Labour greenies in 1995, there has been no credible stick-waving. And there’s no money. So, various people try to set up talk-fests (100 Months club), and the Council has its various Environmental Business Pledges, but they die fairly quickly. The Council said it was going to get 1000 organisations (inc businesses) to both endorse the 2009 Climate Action Plan (aka Manchester a Cretin Future), but only got 220 or so, and clearly didn’t care and didn’t have the stomach to use its power and influence to more strongly encourage business. Softly softly all the way. So, it’s a bit rich for them now to complain business isn’t involved, when the council never used its leadership position when it mattered. Have I digressed?

(5) All the hand-wringing by our Lords and Masters about low voter turnout, distrust and ‘apathy’, but they never take a look in the mirror, or hold their mates to account for pathetic partisan thuggery.

(6) Oh, let’s not even TALK about Whalley Range, the ward the editor of MCFly lives in. I will dig out the FOIA reply from July, I think….

Update – from facebook soon after posting this –  “I have a friend who lives near the stadium. She is delighted with all the investment MCFC have put into the area and she says most of her neighbours are too.”

Was print format from 2012 to 13. Now web only. All things climate and resilience in (Greater) Manchester.
View all posts by manchesterclimatemonthly →
This entry was posted in Manchester City Council. Bookmark the permalink.