Posted on January 31, 2013 by manchesterclimatemonthly

What do academics, climate activists and a pub landlord have in common? They’ve all joined forces to put on a free season of films (1) , around the theme of the end of the world.

On Monday 25th February Mancunians will come together to watch the classic 1970s film “Soylent Green”, starring the late great Charlton Heston. Following the film they will discuss its relevance to Manchester’s future while drinking beer and wine at the Sandbar on Grosvenor St (2). 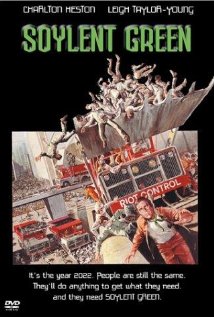 Marc Hudson, co-editor of Manchester Climate Monthly said “Soylent Green is a brilliant and highly entertaining film. No, wait, all the films being screened are brilliant and entertaining – but they also raise important issues…” It’s really important that concerned Mancunians can find like-minded people to think and act on climate change. This film season is one way people can do that.”

The film series, called “Climates of hope of despair,” continues for the following two Mondays (4th and 11th March) with two more films – “The Day the Earth Caught Fire” and “Mindwalk.”

(1) The film festival is co-hosted by two organisations.

Trauma is a free film screening group based at Manchester Metropolitan University. Films are shown every Monday during term time, with seasons lasting three to four weeks. Trauma also occasionally collaborate with other groups to screen one-off films and mini seasons. http://www.hssr.mmu.ac.uk/trauma/

Manchester Climate Monthly is a free and independent publication that aims to “inform, inspire and connect” people in Manchester who are taking action on climate change. http://www.manchesterclimatemonthly.net

(2) Mon 25th February from 6pm at the John Dalton Building. Given the fact that it’s hard to find, we will be meeting at 5.50pm at the statue outside and then going together the specific room – E-145

(3) The Sandbar is a hotspot for Manchester culture. Carved out of a couple of ramshackle Georgian terraced houses, Sandbar opened in 1996 and quickly established itself as a favourite watering hole for students, academics and local people who enjoy speciality beers and friendly conversation in this intimate, independent local. 120 Grosvenor Street, Manchester M1 7HL

PS If this looks like a cut and paste of a press release, that’s because… it is. One what I wrote, so that’s alright then…. MH

Was print format from 2012 to 13. Now web only. All things climate and resilience in (Greater) Manchester.
View all posts by manchesterclimatemonthly →
This entry was posted in Upcoming Events and tagged Soylent Green. Bookmark the permalink.