Posted on June 14, 2013 by manchesterclimatemonthly 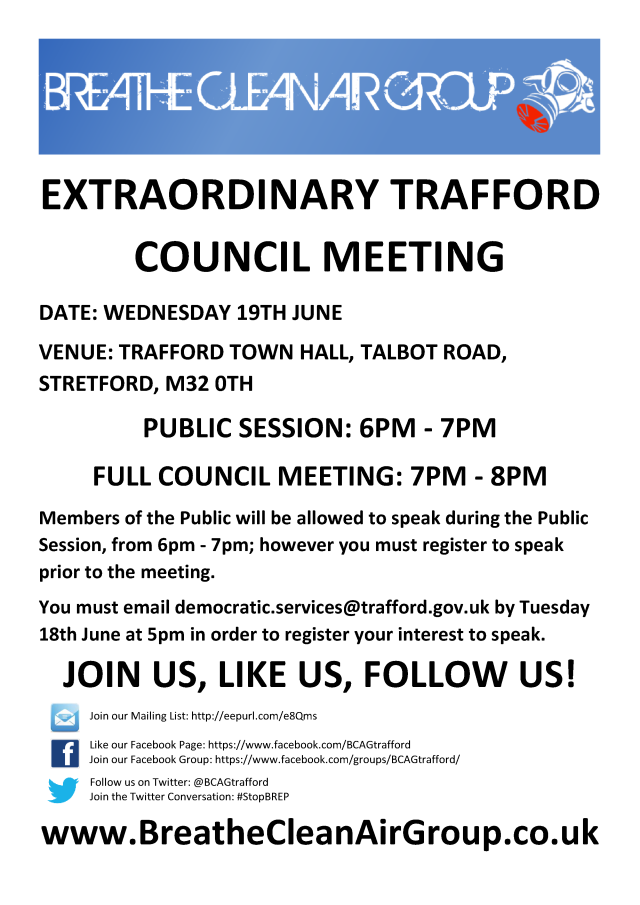 Members of the Public will be allowed to speak during the Public Session, from 6pm – 7pm; however you must register to speak prior to the meeting. You must email democratic.services@trafford.gov.uk by Tuesday 18th June at 5pm in order to register your interest to speak.

The Full Council Meeting will be to discuss the Motion of which the Trafford Labour Group put forward which is as follows:
MOTION PUT FORWARD BY TRAFFORD LABOUR
The Council condemns the decision made by the Conservative Government Secretary of State in overruling this Council’s unanimous decision to refuse planning permission for the development of a Biomass Incineration Plant in Davyhulme.

This Conservative Government decision flies in the face of the Thousands of local people who have campaigned against and opposed this Incineration plant. The decision runs contrary to the definition of “Localism” and believes any notion of local democracy and the strong wishes of our community.

In light of the above Trafford Council agrees to appeal the decision of the Secretary of State through the Court.

Was print format from 2012 to 13. Now web only. All things climate and resilience in (Greater) Manchester.
View all posts by manchesterclimatemonthly →
This entry was posted in Campaign Update, Democratic deficit and tagged BCAG, Breathe Clearn Air Group, Trafford. Bookmark the permalink.