Posted on December 31, 2014 by manchesterclimatemonthly

It began, as so many things do these days, with a tweet. Rebecca Moore, the newest councillor [Labour (of course)] for Withington, proclaimed that it was a Good Thing more people don’t vote Green.

Just for laffs (or “shits and giggles,” as the young folk say)  I asked her a question that I assumed (wrongly) she knew the answer to. “Are the Council’s own emissions down or up?”

I followed it up with the standard disclaimer you have to use unless you want it to see Labour politicians (or ANY politicians, to be fair about this for a moment) reaching for their favourite retort – “you’re a Lib Dem/Green/Ukipper/Monster-raving loonie”.

She is tried to fob me off “nothing to do with me old chum”, ignoring a) the issue and b) the fact that she had been talking about the performance of the Green Party. 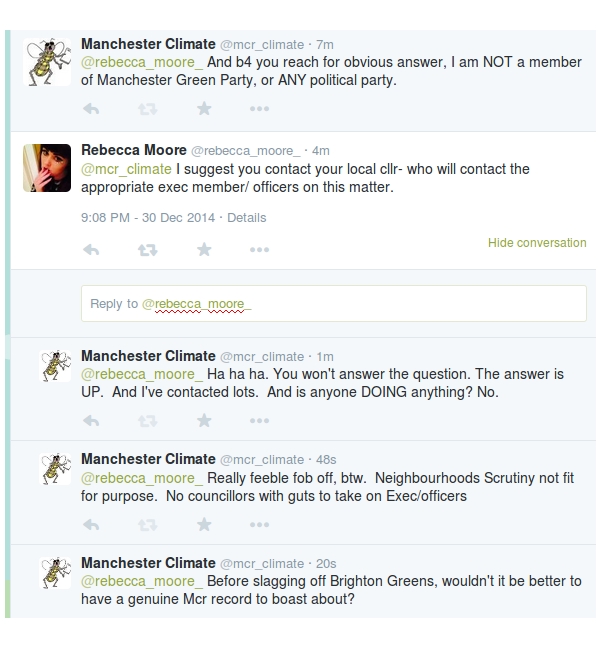 She then reached for the “I’m Proud of My City” meme and, inevitably, tried to take on the victim role, claiming that she was being “trolled”. 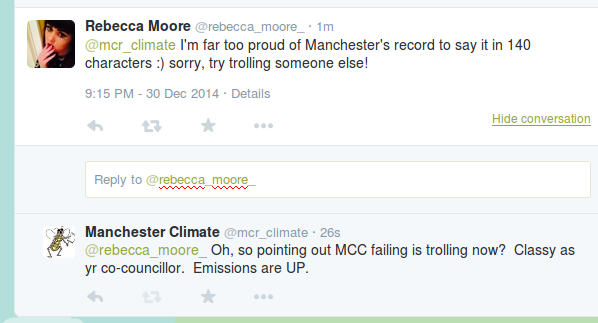 Before defining troll, let’s have a bit of academia.

“A sometimes effective opposition strategy involves claiming the high ground on the victimization issue. One of the main appeals that issue initiators use is to claim that they have been victimized on economic, physical, sexual, ethnic, racial, age or other grounds. Opponents need to neutralize this claim. One way of doing that is to reverse roles. An opponent claims that it has been victimized by the initiator. If successful, the force of the claim for action is weakened.”

The art of deliberately, cleverly, and secretly pissing people off, usually via the internet, using dialogue. Trolling does not mean just making rude remarks: Shouting swear words at someone doesn’t count as trolling; it’s just flaming, and isn’t funny. Spam isn’t trolling either; it pisses people off, but it’s lame.

The most essential part of trolling is convincing your victim that either a) truly believe in what you are saying, no matter how outrageous, or b) give your victim malicious instructions, under the guise of help.

Trolling is NOT asking the same (relevant) question twice. When you reach for the “you’re a troll” defence you do several things

Councillor Moore then (it seems)  read the link I sent her, which shows that Manchester’s emissions are up (this is an admission that had to be dragged out of the Council after great effort, of course).

And did this fact, which she acknowledged, cause any great heart-ache or soul-searching? Did she think twice about her massive pride for Labour’s record? Um, no.

Well, that’s alright then, isn’t it? Because we elect councillors to be happy with Manchester’s emissions going up so long as other councils’ emissions are too. We don’t elect them to have any responsibility for future generations, or for the proper running of the council here in the present.

What do we learn here? That Labour politicians in this city are so unused to scrutiny that it always feels like trolling to them.

That they don’t think they have any individual responsibility for the city’s climate performance.  (It will be interesting to see if Councillor Moore’s name is on the list of people who’ve actually completed their carbon literacy training.  We’ve FoIAed for that list, since despite its promises, the Neighbourhoods Scrutiny Committee clearly wasn’t going to deliver a report on the matter. If she HAS done the Carbon Literacy training, it clearly hasn’t “worked” in her case. If she HASN’T, well, that’s interesting in itself, isn’t it?)

Finally, this. Council Leader Richard Leese was asked about the dangers of single party domination (that’s the politically correct way of saying ‘one party state’). He said:

“We have to ensure we hold ourselves to account within this chamber and we also need to ensure that citizens – and people that have voted for us – are able to hold us to account on an ongoing basis, not just once every 12 months. So it is a challenge. I think it is a challenge for every member of this council but I believe we will demonstrate that as a Labour administration, the people of Manchester were right to put their trust in us.”

And the way that is being applied in practice? Well, you’ve just seen it.

Was print format from 2012 to 13. Now web only. All things climate and resilience in (Greater) Manchester.
View all posts by manchesterclimatemonthly →
This entry was posted in Democratic deficit, Low Carbon Culture, Manchester City Council. Bookmark the permalink.