Is Carbon Literacy Dead? #Manchester retreats from another #climate goal

Posted on July 25, 2016 by manchesterclimatemonthly

The goal of giving everyone who lives, works or studies in Manchester a day’s “Carbon Literacy” training looks to be dead in the water.

At the July meeting of the Neighbourhoods and Environment Scrutiny Committee, the City Council’s Executive Member for the Environment, Kate Chappell, conceded that it was a “difficult programme to roll out across large institutions” and that there was a question over whether the City Council would commit to it in its current form.  She pointed to public exhibitions (such as the “Climate Control” exhibition at the Manchester Museum) as one way forward. 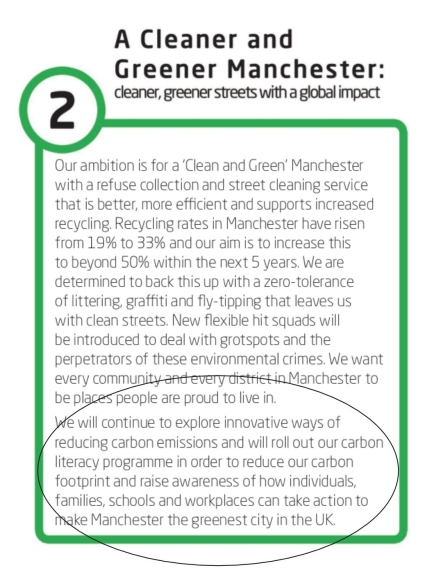 Members of the scrutiny committee did NOT point out that the roll out of Carbon Literacy was in the Manchester Labour Party’s 2016 election manifesto, but instead voiced their frustration that the training kept getting cancelled at short notice. (MCFly first reported this in August 2014).

Nobody pointed out that at in  late 2014 the chair of Neighbourhoods Scrutiny Committee agreed that a “lessons learned from only getting 25 councillors carbon literate instead of the target of 60” should be produced.

You can see the recommendation here.

The report was, of course, never produced

Back to now: the agreement of the Neighbourhoods and Environment Scrutiny Committee was that they might “scrap an unnecessary and unachievable target and get a new one”, with a report back a “couple of meetings time.”
MCFly says

If this comes to pass – but seriously, who could defend the record of carbon literacy training in this city? – then it is just  another retreat from the giddy “ambition” of 2009.

If you ever get the Council to admit its failings, they will Blame The Tories. Every time.  Regardless of the facts of the matter.

There is no point engaging with these people. They lack both the willingness and the capacity to act at the speed that is required.  But ward-based community “resilience” will ALSO leave many vulnerable people in horrible positions, when the shit really starts hitting the fan.  What is needed is a broad-based, intelligent, learning social movement that is capable of winning small battles but is also able to build its own capacity to act.  There are things that could be done, but they won’t be, while we lounge about in the smugosphere.  So it goes.

Next up:  MCFly takes a big dose of humble pie (nom nom), after making wildly inaccurate predictions about what would happen at the NESC meeting.  Watch this space

Was print format from 2012 to 13. Now web only. All things climate and resilience in (Greater) Manchester.
View all posts by manchesterclimatemonthly →
This entry was posted in Climate Change Action Plan, Manchester City Council. Bookmark the permalink.