Posted on September 27, 2016 by manchesterclimatemonthly

A Freedom of Information Act request to Manchester City Council has revealed the sum total of their guidance to their staff on reducing their on-the-job air travel.  Here it is

And here’s the plan they have for producing guidance in the future. 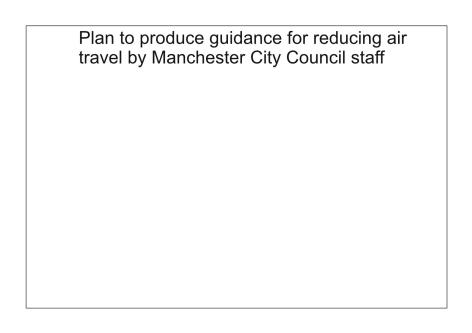 In July 2016, MCFly asked several questions of the Council and its flying, including the following
“I would also like a copy of any guidance supplied to officers and members around reducing the amount of flying they do. If such guidance does not exist, is any being produced?”

Came the reply, 20 working days later.
“There is no specific written guidance regarding reducing the amount of air travel, nor are there any plans to produce such guidance at present”

While you may be shocked (if you naively believe, as I once did, that our lords and masters take their own fine words seriously), it makes perfect sense. Manchester City Council owns 35% of Manchester Airports Group. They get loads of money from the (very profitable) airports within MAG. Having any sort of policy that asked its staff to think once – let alone twice – about flying would be a hostage to fortune.

Oh, and here’s the , sorry, “rationale” they have for their numerous short haul flights. (It wasn’t asked for, but they’ve gotten into the habit of attempting to spin/self-exculpate. Or perhaps just being helpful).

I would also for each of these flights, (and especially domestic and short-haul) were any alternative methods of travel (e.g. train) considered. If they were considered, why was air travel given priority?

Please see the attached spreadsheet. We are unable to provide the information such as dates for travel or reasons for all officers as some of the individuals no longer work for the Council, and the information was not recorded centrally at the time of the booking. In general terms when booking travel arrangements, the factors considered for domestic and short haul air travel included the cost of air travel compared to cost by train. Some of the events were given without notice and the comparative cost of travel by train at short notice compared with cost of flight at the time the booking was made was also factored in. The time taken to arrive at the destination and journey back to Manchester was also considered. For conferences, the start time for the conference and journey time to the conference was also considered. A number of domestic air travel journey’s made by Children’s Services were made due to case related work which requires safeguarding of staff and vulnerable services users to be taken into account as an additional factor.

This is our council, with fewer than a quarter of its members even ‘carbon literate’, with no ward plans that deal with the coming climate crises, with no plan for its own future beyond the ‘inward investment’ mantra.  That buys tickets for people to fly to London, Norwich, Southampton and so on.  Gaia help us all.

PS And yep, I’m flying to Australia shortly, from Manchester Airport. But I’ve reconciled myself to the imminent cooking of the species. The City Council, however, is still spouting fine words, and has a responsibility to look to our long-term well-being. Oops.

Was print format from 2012 to 13. Now web only. All things climate and resilience in (Greater) Manchester.
View all posts by manchesterclimatemonthly →
This entry was posted in Aviation, Manchester City Council. Bookmark the permalink.