Posted on January 2, 2017 by manchesterclimatemonthly 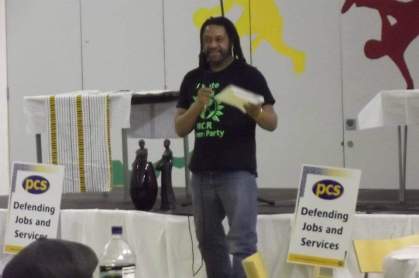 Deyika Nzeribe, who has died suddenly aged 50, , was a much-loved and respected figure in Manchester.  His many admirable qualities included not just intelligence and concern about the state of the world, but a compassion and joviality that enriched those who knew him.  His ability to listen and consider other points of view, as well as talk (and he was a good public speaker) made him an effective advocate.  Beyond this, his energy and passion helped him straddle ‘green issues’ (he had stood as a Council candidate for the Green Party, and was also their candidate in the forthcoming Mayoral elections) and issues of racial justice, both domestically and internationally.  Deyika, rightly,  saw no contradictions in this.

Deyika took his causes very seriously, but did not take himself too seriously.  He was always willing to ask awkward questions, contest the answers he got in a calm and humorous manner.  He was able to consider opposing points of view or criticism without becoming angry or defensive.  But beyond this, he was just great fun – always ready to have a drink, a laugh, always approachable.

It is a tragic loss, far too young.  Condolences to his family , to his colleagues in the Green Party and to the many hundreds of people whose days were made brighter whenever they met this fine man.

If you have memories of Deyika, and the other (creative) aspects of his life, please feel free to share them below. [Update – for example, he was chair of Commonword].

If there is a public celebration of the man’s life, we will give details.

Updates: There is a celebration of his life happening now (2nd January, 6.30pm) at Zion Centre, in Hulme

Here is the Manchester Evening News article on him.

Here is another appreciation of him, more eloquent than what you’ve read above.

Here is the video of Deyika speaking at the launch of his Mayoral campaign.

Was print format from 2012 to 13. Now web only. All things climate and resilience in (Greater) Manchester.
View all posts by manchesterclimatemonthly →
This entry was posted in Greater Manchester. Bookmark the permalink.