Posted on September 20, 2017 by manchesterclimatemonthly 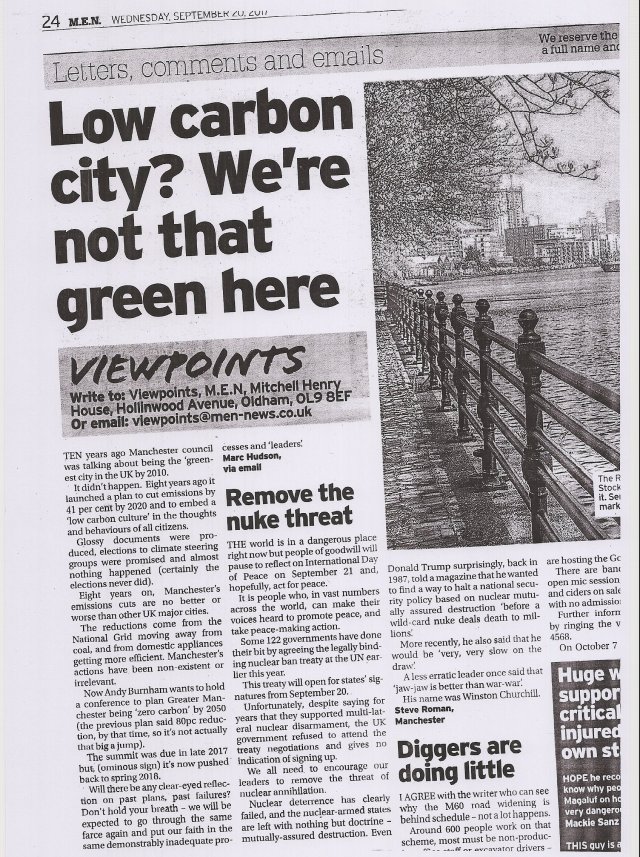 And the text I sent –

Ten years ago Manchester City Council was talking about being the ‘greenest city in the UK by 2010. It didn’t happen. Eight years ago it launched a “plan” to cut emissions by 41% by 2020 and to embed a ‘low carbon culture’ in the thoughts and behaviours of all citizens. Glossy documents were produced, elections to climate steering groups were promised and… almost nothing happened (certainly the elections never did).
Eight years on, Manchester’s emissions cuts are no better or worse than other UK major cities. The reductions have happened come from the National Grid moving away from coal, and from domestic appliances getting more efficient. Manchester’s “actions” have been non-existent or irrelevant. Now Andy Burnham wants to hold a conference to plan Greater Manchester being “zero carbon” by 2050 (the previous plan said 80% reduction, by that time, so it’s not actually that big a jump).
The summit was due in late 2017 but, (ominous sign) it’s now pushed back to spring 2018.
Will there be any clear-eyed reflection on past plans, past failures? Don’t hold your breath: we will be expected to go through the same farce again and put our faith in the same demonstrably inadequate processes and “leaders”.

Was print format from 2012 to 13. Now web only. All things climate and resilience in (Greater) Manchester.
View all posts by manchesterclimatemonthly →
This entry was posted in Greater Manchester, Letters to the MEN, Manchester City Council and tagged Andy Burnham. Bookmark the permalink.