Posted on January 24, 2018 by manchesterclimatemonthly 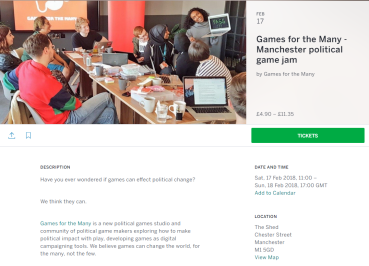 “Games for the Many is a new political games studio and community of political game makers exploring how to make political impact with play, developing games as digital campaigning tools. We believe games can change the world, for the many, not the few.”

Who should come to the games design event you’re holding in February, and why?

We’re welcoming everyone to our gamejam in Manchester this February. We’re calling on developers, designers and activists to come together and design political games around the issues they care about, or even help put together a game for the 2018 local elections. Participants don’t need to know how to code to take part.

We’re holding game design events across the country to help build a nationwide community of political game makers. Primarily, these events are about creating games, and providing people with the opportunity to access the tools and know-how how to make them. Games produced at the event may be taken forward, if the team agrees, as a game for the 2018 elections or a later snap general election.

This event is also about helping people find a voice through a new medium: games. Games are powerful tools, they are dynamic, immersive, they can tell interactive stories in a way no other medium can, spark debates, educate and agitate. With software like Twine or Game Maker it’s easier than ever to make powerful games without needing to code.

The game jam is open to any and all, yes, even Tories. In our previous game jam we had Lib Dem activists as well as Spanish and Swedish activists, who are not necessarily connected with the British Labour Party. We believe a diversity of opinion can bolster the creative process. During the development of CorbynRun we reached out to Conservative activists and voters and invited them to playtest the game. Their input was valuable. We can learn from each other.

What will “success” look like for the organisers at the end of the weekend?

Success at the Manchester Game Jam looks like everyone participating having a good time, learning from one another, developing games to express political ideas and concepts. Some of those games may go on to be invited to take part in further development, but that’s an added bonus for us.

Who ARE the organisers?  Where did the idea come from, where does the money come from?

The two co-founders of Games for the Many, James Moulding and Rosa Carbo-Mascarell, are organising the Manchester Game Jam. James is a political campaigner and project manager. Rosa is a game designer and game jam organiser.

We felt that running game jams should be a crucial part of what Games for the Many is about. We’re not interested in just making games by ourselves, we wanted to foster a movement of political game makers alongside us, working and learning together. From these game jams a range of prototypes will be developed, some of which will then go on to form the basis of Games for the Many’s contribution to future Labour campaigns. There’s also an aspect of wanting to provide an outlet and an opportunity for independent game developers to use their talent to political ends.

The perception, fair or unfair, is that most gamers, or coders are the proverbial 25 year old teenager living in his parents basement, and that the ‘culture’ is difficult for women to be part of.  What steps have you taken/are you taking to a) reach out to women and b) make sure that the stereotypes/expectations are not met ‘on the day’.

Rosa Carbo-Mascarell is a Women in Games ambassador and sits on the Women in Games board. There is a strong community of very talented women in the games industry, breaking the harmful stereotype every day. In her experience of running game jams, she has received messages from women saying they weren’t sure if they should come along because “they didn’t know if their skills would be useful”. Since then she’s made sure that all her events highlight that coding is not necessary to make a game. Everyone can get involved, including those who have never made a game before. With that base, she has spread the event across her networks of female game developers.

What would you say to someone who said “austerity, poverty, sexism and climate change are not things to make games about – it trivialises them”

Games and play are integral in coming to an understanding of how austerity, poverty, sexism and climate change work and how we find solutions to deal with them. We learn, empathise and explore through play. Just look at children, playing is how they learn how the world works and find their place in it. It doesn’t stop when we’re adults, just shifts to more adult forms of play. Talking about zero-hours contracts in Corbyn Run doesn’t trivialise the issue, it makes players aware of it and what Labour is going to do against it.