Posted on October 11, 2018 by manchesterclimatemonthly

… and a solidarity demo/protest in Preston. 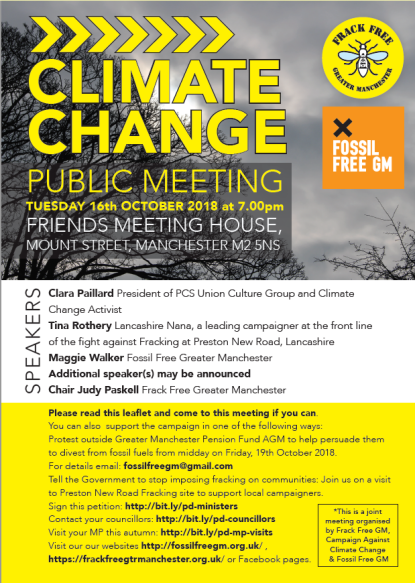 NB Additional speakers from Shell Out Campaign and Extinction Rebellion, have been invited.
And we will have a Lipspeaker with Sign, so meeting will be more accessible to deaf and hard of hearing people (please arrive a little before 7 so we can seat you near the lipspeaker).
New event:
National demo at Preston New Rd  fracking site, Saturday 20th October: Free the Three and Protest the Start of Fracking!
We have booked a coach:leaves 9.15am from Chorlton St.,returning 4pm. Book your free place (donations on the day if you can) on this eventbrite site:
https://www.eventbrite.co.uk/e/stop-the-fracking-free-the-three-tickets-51164846433
or text me on 07981495614
Other events:
Fridays for Future Protest / Vigil tomorrow, Friday 12th outside Manchester Town Hall-11.30-1.30
Greta Thunberg, a Swedish school student, has started a climate campaign called Fridays for Future, standing outside the Swedish Parliament every Friday. People all over the world are doing similar protests and we have started one in Manchester.
Look for  Allan Challenger  outside Town Hall main entrance , or at rear entrance in Peace Garden behind (on St Peter’s Square) – see detail in Facebook Event: https://www.facebook.com/events/2186562534955868/
Protest/lobby of Greater Manchester Pension Fund AGM, Friday 19th October
GMPF is the biggest investing Pension Fund in England in Fracking industries. Protest from 12 noon at Guardsman Tony Downes House, Manchester Rd, Droylsden  (near Droylsden metrolink): get pension money out of fossil fuels!
In planning: Free the 3 Fundraiser gig Saturday 3rd November from 7.00pm
Facebook Event: https://www.facebook.com/events/241592539865578/
A fundraiser for the four surfers, one who is now out of prison and the three others who are just begining their sentences.
Let’s show them and the four surfers that they have 100% support from all of us, we have a night of fantastic live music lined up, Venue details to follow it is going to be in Manchester.