Posted on May 31, 2019 by manchesterclimatemonthly

The latest interview with an Extinction Rebellion activist – see here for others! 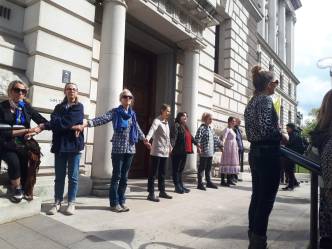 When did you first become aware of climate change as an “issue” and how. As far as you can remember, what were your reactions to it?
I first became aware of talks about the ozone layer and aerosol use when I was younger and I was concerned . About 14 yrs ago Global Warming came into my consciousness and with young children I was very concerned and had many sleepless nights . Over the years I’ve signed petitions , donated money , recycled , only have one car and use it rarely etc but I have flown , I’ve been a lapsed veggie for years and I’ve never been an activist .
I’ve been asleep , trusting that someone else , the powers-that-be would sort it out !

Assuming that “something changed” recently to get you heavily involved, what was that? (Greta Thunberg? IPCC report? XR meeting?)
It was reading the IPCC report last October that woke me up !
I realised how urgent the situation was and couldn’t believe that it wasn’t headline news every day ! Why wasn’t more being done ? Why didn’t everyone feel the urgent need for action ? I also felt guilty that I’d been asleep and hadn’t been doing more . So I joined XR in October and was sitting down on Waterloo Bridge waiting to be arrested in November.

What have been the most positive things about being involved so far?
A feeling of active hope that despite the terrible possibilities I am able to do something and affect some small change . Being able to add to the noise that has changed the conversation and brought it out and further up the political and social agenda .

What would you say to someone who said that groups like XR often go up like a rocket and down like a stick, that they involve lots of the ‘same kind’ of people (students, middle class people with degrees, retired hippies) without reaching beyond that particular type of person?
Yes I’d agree to an extent .That’s why we need to keep the effort and noise . Reaching out to the wider community , appealing to other sections of society . Increasing visibility, telling the truth about the climate emergency so it becomes more normal , people recognise the urgency and so feel happier getting involved .
But there are also lots of other people involved from lots of different backgrounds and groups that don’t fit your description and I’m one of them .

What do you personally hope to get from being involved?
See above answer to positive things .

What mistakes do you think previous groups made in trying to get climate change onto the political/cultural agenda?
They’ve been too polite , climate scientists have also been unwilling to tell the truth and groups haven’t been able to mobilise enough people who were willing to get involved in nvda or state their willingness to be arrested.

Was print format from 2012 to 13. Now web only. All things climate and resilience in (Greater) Manchester.
View all posts by manchesterclimatemonthly →
This entry was posted in Extinction Rebellion, Interview. Bookmark the permalink.