Posted on July 8, 2019 by manchesterclimatemonthly

Manchester is missing its emissions reductions targets by an enormous margin. The latest report from the Manchester Climate Change “Agency” was released yesterday, at a two hour “conference.”  One of the authors of the report (full disclosure – Dr Joe Blakey is a good friend) has summed up what you need to know in 6 succinct tweets.  For those of you who don’t do Twitter, here it is.  I’ve highlighted my takeaway, but the whole thing is terrifying, and a stunning indictment of the failure of the official election-cancelling, stakeholder-conference-canceling, meet-in-secret, incompetent apparatus that has passed for a proper response to climate change, these last ten years…

The @McrClimate 2019 report has been released. It’s been a pleasure to contribute some accounting and write up along with rest of the CO2 group and @jaisekuriakose. However there are some stark warnings in here

.@TyndallManc advise we need to reduce emissions by 13% year on year to stay within their new Paris-aligned ‘zero’ carbon budget. @jaisekuriakose has reported that last year we achieved just 2.5%. Much more radical urgent action required. 3/6

We’ve been working to gain a picture of aviation emissions from flights departing Manchester airport. It looks like this. They were sharply rising (by half a million tonnes 2014-2017), however they pretty much stayed stable 2017-2018. 4/6

.@TyndallManc have said UK aviation emissions need to stay stable 2018-2032 and decrease until 2075 for the zero carbon budget to hold. Departing flights from the airport must *at least* do the same. If we transpose this pathway on to Mcr aviation emissions, we get this… 5/6 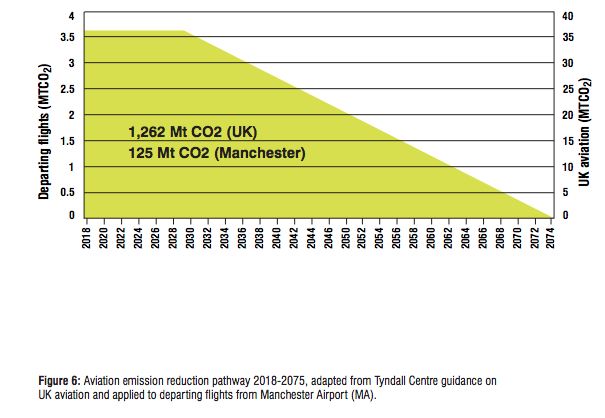 Finally, the city can pull many levers in bringing about this aviation pathway. There are many perspectives on the role the city can take. I’d argue we shouldn’t pick one or the other, but keep this debate open and pull every lever at our disposal. 6/6 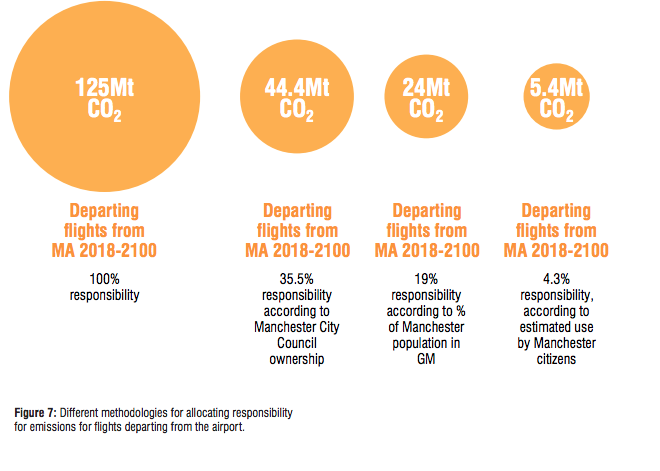 MCFly says: We heard on the grapevine that  there is at least one councillor walking around saying that campaigning for a climate emergency declaration is going about things completely the wrong way, and criticising folks for “forcing an agenda that they’re already working on, we just need to be patient”.

Yeah, right.  Thanks for that.

Was print format from 2012 to 13. Now web only. All things climate and resilience in (Greater) Manchester.
View all posts by manchesterclimatemonthly →
This entry was posted in Manchester Airport, Steering Group. Bookmark the permalink.