Non-event report: SURF’s not up, and the stories of “sustainability” are, um, rubbish #Manchester #smugosphere

Posted on November 4, 2012 by manchesterclimatemonthly

Attention Conservation Notice and disclaimer all in one: MCFly went to “Sustainable Stories,” an event and exhibition organised by some academcis. Truly soul-destroying – wasted food, wasted time, wasted opportunity. It *could* have been different. The next post explains how… (NB We are not dissing the researchers or the people doing stuff whose work and efforts appear in the exhibition.)

Talk, of as they say, is cheap. Which means there is a lot of it. And there certainly was at the launch event that MCFly went to on Friday 3rd November. The Centre for Sustainable Urban and Regional Futures at Salford University (SURF) is one of the outfits behind “Sustainable Stories” at the Cube gallery on Portland Street.  What’s that? Well, it claims to be “an interactive exhibition to share and provoke discussions about the future of Greater Manchester.” Er, no, not really.

After an extended introduction by Beth Perry, two speakers spoke, at length (these were not “short presentations” as per email invite. The first was Professor Martin Hall, Vice Chancellor of Salford University and the second Sir Richard Leese, Leader of Manchester City Council,

The organisers do not seem to have organised either audio or visual recording of the speeches. I did, with my video camera. Sadly the quality is not really worth putting on the internet. 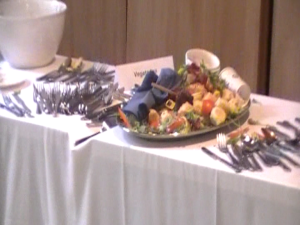 While Professor Hall was speaking the uneaten food from the buffet was cleared away. A piled high plate (at least) of it. Oh the irony. Did nobody think to supply doggy bags so that people could take it away? Er, no. Epic fail.

Richard Leese’s talk was unsurprisingly, a mash-up of previous speeches. There were a couple of new bits though.

Firstly on “Growth” and what he calls “no-growth” (during which he was heckled by local institution Carol Batton).

So, seventy or so people were ego-fodder. Then there was the obligatory question and answer session and it was unsurprisingly low-energy and desultory. Most people then sensibly left before what was, in the pre-publicity, labelled a “workshop”. This had actually been a big part of the reason I decided to use up three non-renewable hours of Annual Leave from my wage slavery. Oh dear….

I’d spotted that the “workshop” was actually a panel discussion in a more recent email from the organisers, after I’d booked my annual leave. But once in the room I found it had metastasised from four to eight people. And this “workshop” was going have the format of everyone sat in rows. Fortunately, someone insisted on creating a circle. Fortunately everyone over-rode the chair’s lukewarmness to this, so we formed an oval shape. Better than nowt…
After a few minutes of DBP, your brave MCFly editors had had enough. We legged it (law of two feet and all that). People who have told us we did the right thing. We are reliably informed that the eight panellists kept to their three minutes (miracle of miracles).

This event lacked any sense of the past failures of the “sustainability” “movement” (is there such a thing). This event made no mention of likely disruptive incidents coming up (has nobody been watching the news?) There was no sense that sustainability is so radically different from where we are now that these no-pain gradualist stories are just a lullaby.

Making it better
Realise that if you want to create dialogue you need to overcome;
* the shape of the room/scrum for food
* the typical British reserve about talking to strangers
* the tendency of people to clump in (unintentionally intimidating) groups of friends/colleagues.

Make sure you don’t waste food. Seriously. It may not have been a huge amount, but wouldn’t supplying doggy-bags help create an expectation/pressure on future events?
Call things what they are – if it’s a panel discussion, then call it that, so people who would have to take annual leave can make an informed decision about what they are letting themselves in for.

See the speech I would have given, and the format of the event, in the next post.

Why am I writing this?
For the lulz
For revenge (three hours of Annual Leave I will never get back)
To warn people not to waste their time with events put on by this organisation, unless there is clear and credible evidence of learning (don’t go holding your breath)
In the vain (cough cough) hope that things might change. There are precedents (from this to this) .

When I arrived I was outnumbered by staff by a factor of about 6 to 1.
I left just as the first lot of “speakers corners” speakers arrived. And came back just before the second lot. It never seemed much busier than two or three people, besides the very very cool artists doing the “visual minute taking.”
The exhibition, which finishes today, is achingly light on local realities. So it goes.

It’s tragic that it was so poorly advertised. It’s tragic that none of the displays talked about the reality of Manchester and Greater Manchester’s Climate “Action” Plans. With the former, the target was for 1000 organisations to endorse it. 220 or so have. Only two of those have actually written their own implementation plans. On the latter, there is a missing “Implementation Plan” that was due over six months ago and still seems no closer to completion.

Public health warning People at SURF used to like us. We got invited to a couple of seminars. We wrote them up [Manchester and Nottingham]. They stopped inviting us. Go figure. They also passed on our details to an academic researcher doing work on Tesco and its sustainability policies. We said yes to an interview on the condition that we got a transcript. We never got a transcript. We didn’t even get the courtesy of a pro-active message from that academic to the effect that the recorder had not worked. All we got was waffle. We pointed this out to her bosses, along with a proposed disclaimer form for avoiding this sort of mess in the future. These bosses decided we were aggressive and unhelpful.

We also know that MCFly’s name was put forward as one of the potential “speakers” for the speakers corners on the weekend, but rejected.

So maybe all this above is just sour grapes. But we don’t think so.

PS We’re not anti-academites.  Some of our best friends are academics.  Honest.

Was print format from 2012 to 13. Now web only. All things climate and resilience in (Greater) Manchester.
View all posts by manchesterclimatemonthly →
This entry was posted in academia, Event reports and tagged lullaby, smugosphere, SURF, wasted food. Bookmark the permalink.

4 Responses to Non-event report: SURF’s not up, and the stories of “sustainability” are, um, rubbish #Manchester #smugosphere