Posted on March 21, 2013 by manchesterclimatemonthly

Attention Conservation Notice: Two speakers take up LOTS of time and space in order to say, well, not very much at all. And this is how we are going to build a movement to challenge our species’ suicidal impulses?? Please read the disclaimers and prebuttals before commenting.

On Friday 15th March around 130 (yes, that’s not a typo for 13 or 30) people gathered to be informed, inspired, connected and involved around the concept of “Green Economy, Green Jobs.”(1)  It was, yet again, a criminally wasted opportunity in a city that needs a growing, learning organising and winning eco-movement… 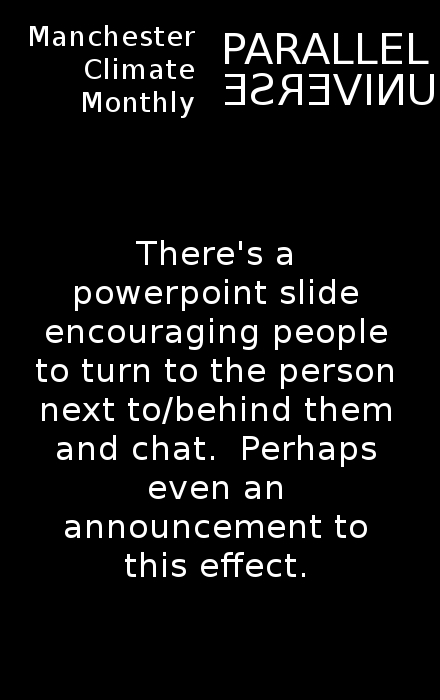 The event was organised by Manchester Green Party (2).    Their new National Leader, Natalie Bennett, was in town (3) and was joined on the stage by Neil McInroy of the Centre for Local Economic Strategies (CLES).  In a parallel universe, with the same space, time and money, the event could have been a thing of beauty and influence.

It started with people sat in rows waiting for the event to begin.  The leader of MGP handed over to the chair, who did housekeeping about fire exits and mobiles and exhorted people to keep their contributions short and not-personal (cough cough).

Neil McInroy then did his standard spiel about CLES.  “Truly independent…” and  “I’ve been to London, Fife, Accrington this week.  Unparalleled opportunity to write a new story. Lots of problems (unemployment, underemployment etc). Make sure necessity is the mother of re-invention. Four issues – Westminster Bubble is Bad, Good Times weren’t always so good, economic sphere not the opposite of social life.  The story needs to be of 1) growth [steady-state is a nice idea, and a “debate to be had” but no longer something Mr McInroy is advocating in any shape], 2) economic injustice 3) green economy and 4) stewardship.

“Redistributive local state. Aggressive procurement strategy.  Scale it up.  Old answers not fit for purpose.” All this was non-specific, shopping lists of motherhood, apple pie, more motherhood and locally-sourced apples for a second serving of that apple pie.  I think Mr McInroy is almost certainly better than this.  I think the meeting organisers could – and should – have gotten more out of him.  I think the question they set was too general, and so what they got – given the facts that he only had ten minutes and wasn’t being paid to spend time beforehand to do some research and deep thinking – was his standard stump speech.  How about asking him “what are the five things that – in a year’s time – will let us know if we as a Greater Manchester “economy” are on the right track?” And “What are the five actions that individuals and communities can do that will help change the rules of the game?”

Artistically vague
If Mr McInroy was talking about new uses of Monet, Ms Bennett was talking Pollocks.(4)
I literally lost count of the number of times I heard the word “local” used as a synonym for “virtuous” and “sustainable.” For heaven’s sake; the Ku Klux Klan was “local.” Burning down houses to keep warm would be “local.” “Local” is one of those hollowed-out words like “natural” or “community” that simply means “something I approve of.” The sooner it is laughed into oblivion the better.

Anyhows, Ms Bennett pointed out the “good old days” (pre-2008 crash) weren’t so hot. In 2006 a quarter of pensioners and children were in poverty, inequality was growing rapidly, low wage-low jobs economy was in place, and we had an unsustainable “Three planets” living” way of life (5).  Since 2007 there’s been a rise in both deficit and debt, but no-one asks where the money went (banks bailouts! – this got a cheer). The IMF is telling Osborne to spend money, but he’s not “from personal characteristics or because he’s nailed his colours to the mast” (6)  The UK can not depend on banking, pharma and the arms industry. The Square Mile is a Bad Thing (who knew?) 7% of the fruit we eat is British (won’t somebody think of the carbon?)  Bottom 20% of the population has stopped eating fruit.  Market gardens paved over.  Pot-noodles being re-shored [see Tim Harford in the weekend FT  16/17th for a good caveat on this]. We need to bring production back to Britain. Local Manchester Pound a Good Idea.  But not autarky – we need (some) Global Trade.

Am I being unfair? Perhaps.  My point is this; at no point did either of the speakers say anything that got feathers very ruffled, or that particularly surprised many people.  And after 45 minutes only four people in a room of 130 had said a word. As one blogger writes – “With hundreds of people in your audience, every minute you’re speaking solo at a conference session sucks up hours of people’s time—time that they could have used to connect with their neighboring peers. Is your content worth it?”

The question and answer session started with hands going straight up.  Unless the chair takes active steps to increase the confidence of the diffident, this is what happens – those who speak are the most confident ones, and/or people with axes to grind (questions were “well, you’ve not talked about x/don’t you agree that” type.)

Rant #1
What the speakers were saying is that we need to rein in capitalism. Fine. They would both say “no return to 1960s style social democracy is possible.” Fine. I buy that. Then how come they are participating in public meeting formats that haven’t changed since the 1860s. Or probably the 1760s? Who do they think is going to make these changes happen (the “agency problem” if you want to get all Marxist about it? How do they think that this sterile sage-on-the-stage format is actually helping? Are they alive to the hypocrisy of telling Governments and Corporations to act differently, but continuing with a pattern of meeting that creates collusive passivity and turns potential participants into ego-fodder?  This. Format. Doesn’t. Work. If meetings like this, and the other staple action – marches (used a lot less since February 2003) – worked to build an effective political and social movement, don’t you think, um, we’d be there by now?

So, at precisely 8pm, only 2/3 through the allotted time, your correspondent invoked the law of two feet.  What I “missed” (life is really too short); some more questions.  A couple of Green Party members making short and-by-all-accounts-useful reports of local action that folks can get involved in.

Disclaimer/prebuttals: Doubtless I will be told that I am pathologically negative, jealous of the turn-out blah blah blah, unreasonable, merely a “gadfly” (7). I will be told that “the feedback from some people has been positive” and that MCFly only ever publishes negative hatchet jobs. Yes, well, we’ve been here before and unless I totally lose the will to live (which would clearly make some people happy), then we will be here again. It didn’t have to be this bad. It really didn’t. And it *mustn’t* be this bad. If this format helped to build the vibrant growing movement that we need, don’t you think we’d be in much better shape than we are?

Footnotes
(1) Well, many of them probably wanted most or all of those.  Very very few got more than one or two.

(2) The MCFly editors would like to state that we are not now, and have never been members of the Green Party. Or the Trots. Or the Lib Dems. Or Labour. We take the Marxist line, y’see;  “I wouldn’t be a member of any club that would have me as a member.”  (Groucho Marx)

(3) She gave an interview to MCFly, which we are in the process of transcribing.

(4) That’s probably the last interview we ever get with anyone from the Green Party. So it goes.

(5) It’s worse than that, of course, because the insane consumption of we Westerners is dragging the average upwards.

(6) Or because the Tories know they have one term in which to do mortal damage to the notion of collective solutions to collective problems, an idea they have recently (1979 onwards) come to hate viscerally.  Or is that a conspiracy theory?  Discuss.

(7) The one charge that would stick – and would hurt – is of hypocrite. The last time I was involved in a big public set-piece event like this, it was not nearly as interactive and dynamic as it could and should have been. Not well-organised enough either. And a lot of the responsibility for that lay on my shoulders. Just because I am a hypocrite doesn’t mean I am wrong…

Was print format from 2012 to 13. Now web only. All things climate and resilience in (Greater) Manchester.
View all posts by manchesterclimatemonthly →
This entry was posted in Democratic deficit, Event reports and tagged collusive passivity, death by boredom, ego-fodder, information-deficit model, movement-building, sage on the stage. Bookmark the permalink.