Predictions about the #climate rally in #Manchester today

Posted on November 12, 2015 by manchesterclimatemonthly 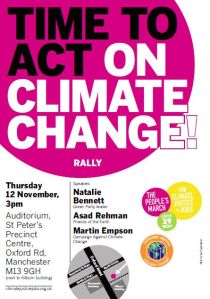 As a trainee (social) scientist, I’m gonna make some predictions about the climate rally today.

Based on my theories that

then I make the following guesses/hypotheses

The speeches will revolve around the following

[btw, just for the record, I heartily endorse the first four of these points. They seem extremely uncontroversial to me.  Though on point two you might want to substitute ‘industrialism’ or ‘growthism’]

There will be nothing on

There WILL however, be some token comments about ‘it’s really important to take local action too’.  These will come from organisations that a) haven’t managed to win a local election since 2004, b) hold incredibly boring meetings and are basically willing to be a fig-leaf for the Council and c) don’t even have a local organisation that holds meetings or has its own website, but simply band-wagons onto the issue du jour.

Given the nature of the climate movement generally, (i.e. not based on theory as past experience the audience will be about 25 to 50 people.  Crushingly white.  A mix of very committed types (including the organisers and their paper-selling friends) and random mostly young people (university students).

The event will not be filmed/live-streamed, because of a lack of technical know-how and willingness to include people who cannot turn up at 3pm on a workday.  [This a shaky prediction – Bambuser is slowly penetrating organisers’ awareness].

The format will be three speakers followed by Q and A, giving people a chance to show off their knowledge/commitment/zeal.

The first three questions will come from men (unless of course a woman who wants to prove me wrong reads this!].

No effort will be made by the organisers to make the Q and A more interactive, more open to new people, women, those with less status/confidence.  Though this is of course very doable.

Now, a critic would say

And my reply would be a) come on if you think you are hard enough and b) just because I am sick of the smugosphere, doesn’t mean the smugosphere effectively recruits and retains people. If it did, the world wouldn’t be in quite such a fricking mess.
Why am I going? Because it is literally 50m from where I work. If it were 100m, I’d pass.  Because I will get to test my hypotheses. If I am right, I get to be (even more) smug and insufferable and say “I told you so”. If I am wrong (and I hope I am) then a) the ‘movement’ is not in quite such bad shape as I thought (result!) and I get to modify my theories and expectations.  Note that I did not say ‘hopes’.

Was print format from 2012 to 13. Now web only. All things climate and resilience in (Greater) Manchester.
View all posts by manchesterclimatemonthly →
This entry was posted in Campaign Update, capacity building, Fun, narcissism, Signs of the Pending Ecological Debacle, University of Manchester, Unsolicited advice, Upcoming Events. Bookmark the permalink.

1 Response to Predictions about the #climate rally in #Manchester today